Boeing has submitted its response to a request for proposals to supply South Korea’s first in-flight refuelling capability, pitching the 767-based KC-46 for the four-aircraft deal.

In development for the US Air Force, which plans to acquire 179 examples via its KC-X tanker programme, the KC-46 could support Seoul’s Boeing F-15K strike aircraft and Lockheed Martin F-16C fighters if selected, along with its Korea Aerospace Industries TA-50s and future 60 Lockheed Martin F-35s. It also would provide “the ability to operate seamlessly with the US Air Force during combat and humanitarian relief operations”, the company adds. 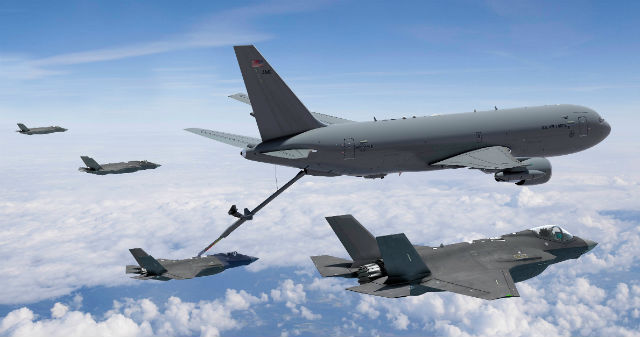 “Korea’s Defense Acquisition Program Administration is expected to complete its competition by the end of this year,” says Boeing, which points to the 767’s “in-service readiness rate of approximately 99% as an airliner, freighter and tanker”.

Boeing has previously said international deliveries of the KC-46 could begin in 2018, with its first development example to be flown for the first time later this year, and USAF deliveries to start in 2016.

Powered by Pratt & Whitney PW4000-series engines, the KC-46 will be produced with a cargo door and main deck cargo floor. In a statement issued on 30 June, Boeing says the model will be able to operate “from a large variety of smaller airfields and forward-deployed austere bases” – a veiled reference to the larger Airbus A330-200-based multirole tanker transport being offered to Seoul by Airbus Defence & Space.