Boeing’s maritime surveillance aircraft (MSA), which is based on a Bombardier Challenger 605 platform, will be an ideal aircraft for countries that already operate Lockheed P-3 Orions, the company says.

Speaking at the Navy League’s Sea-Air-Space Exposition near Washington DC, company officials add that potential customers will also be countries in the Asia-Pacific and Persian Gulf.

“Likely customers are going to be [countries] with a challenging maritime environment,” says Jeff Brown, Boeing’s director of business development for electronic and information solutions. He adds that the MSA will be an ideal platform for performing surveillance of economic maritime zones within roughly 170nm (320km) of coasts.

“A plane like the Challenger can get to station quickly and spend a longer amount of time there” than turboprop-driven alternatives like the P-3, says Brown. 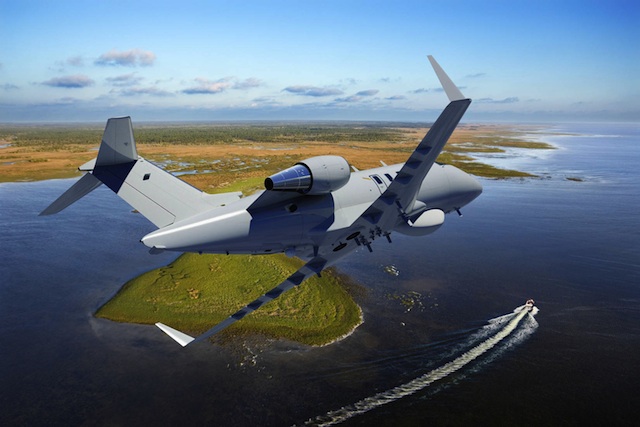 A prototype MSA achieved first flight on 28 February, following modifications to a Challenger 604 test asset performed by Toronto-based Field Aviation. The test aircraft was subsequently flown to a Boeing facility in Yuma, Arizona, where flight testing will continue, Field says.

Flight testing is scheduled to conclude by the end of 2014, with production to start in 2015, Field says.

Boeing says it has targeted 20 to 30 potential customers, and estimates the market value to be $10 billion over 10 years. The aircraft will be marketed to coast guards, militaries and other government operators, according to Field.

The base version of the MSA will be manned by two pilots and three system operators. It will be offered with a Selex ES Seaspray 7300 maritime surveillance radar and a FLIR Systems Star Safire 380 electro-optical/infrared sensor. Options will include two additional crew stations and equipment such as satellite communications and a side-looking airborne radar, says Field. Future aircraft could also be outfitted with weapons mounted on wing hardpoints, it adds.