The industry is today mourning one of business aviation's highest-profile ambassadors, Niki Lauda, whose death at the age of 70 was announced early this morning.

The former three-time Formula 1 champion was a long-time Bombardier customer and pilot, and took delivery of his latest aircraft – a Global 7500 – in March. The jet was the first example of the ultra-long-range type to go into service in Europe.

Lauda, one of the biggest sporting names of the 1970s and 1980s, went on to form two airlines, Lauda Air and Niki, which he subsequently sold.

He had previously owned and piloted a Global 6000 and Global 5000, as well as a Challenger 300. He used the aircraft to travel to races around the world from his home in Austria.

At EBACE four years ago, he featured on the front page of Flight Evening News when he placed an order for a Global 7000. 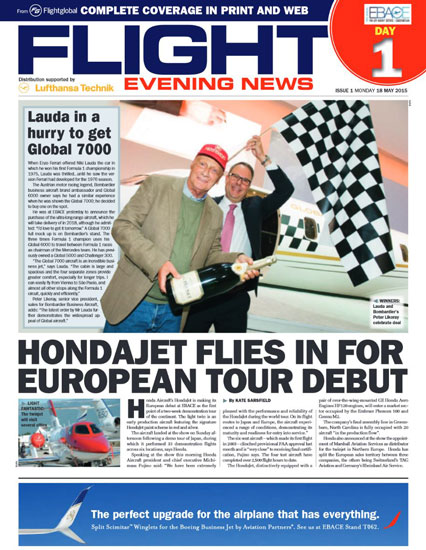 Lauda suffered third-degree burns to his head and inhaling toxic gases that damaged his lungs in a crash in 1976 at the German Grand Prix in Nurburgring. He made a full recovery and returned to racing, but had experienced intermittent health issues since then, undergoing two kidney transplants and a lung transplant last August.

At a joint press conference with F/LIST this morning, Bombardier said that it was marking Lauda’s passing with the "deepest condolences".

"As an operator, owner and valued friend, Lauda embodied everything we strive for in the development of our products and services – an uncompromising commitment to excellence driven by immense passion and vision.

"We were infinitely proud and privileged to have Niki as a friend of the F/LIST and Bombardier families for so many years."