Gulfstream has commenced flights with its second and third G700 test aircraft. 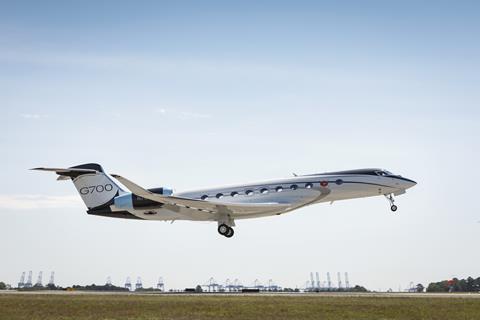 The G700 is powered by two Rolls-Royce Pearl 700 engines

Both flights were conducted from Savannah/Hilton Head International Airport, and achieved an altitude of 45,000ft and a speed of Mach 0.85.

“The G700 flight-test program is running very well, a reflection of the extensive testing we conducted in our ground labs,” says Gulfstream president Mark Burns.

“All three flight-test aircraft are performing exactly as we expected them to, and that helps us ensure a safe and thorough certification of the highest performing, most spacious and technologically advanced aircraft in business aviation.”

The first G700 test aircraft (msn 87001, N700GA) flew on 14 February. The three aircraft will be used for envelope expansion, flutter testing, flying qualities, flight control, and too look at mechanical systems. Work will also include flights related to icing and environmental control systems.

Certification and service entry are expected in 2022.