The aircraft were delivered between December 2020 and July 2021, and underwent extensive modification works in New South Wales (NSW), says Rex. 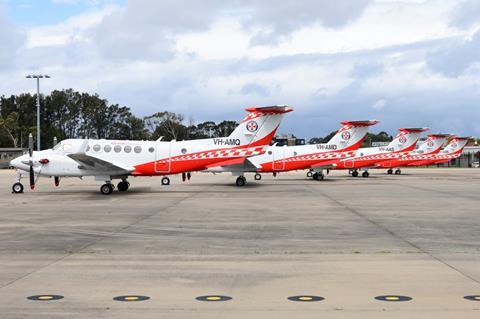 The work, undertaken by Total Aerospace Solutions, allows the King Air 350s to undertake a range of medical flights, including patient transfers, pediatric flights, major incident responses, and other missions.

The aircraft will serve the NSW Air Ambulance service, which Pel-Air has supported for a decade.

“We are honoured by the confidence that NSW Ambulance has placed in Pel-Air to be able to successfully carry out the procurement and modifications of these new aircraft and to run its aeromedical retrieval operations for the next ten years,” says Rex chairman John Sharp.

“Despite the challenges presented by the Covid pandemic leading to a delay in the delivery of the planes to Australia, the aeromedical modifications were completed on time.”