“Volocopter is ahead of the curve in the UAM industry, and we have the achievements to prove it,” says Florian Reuter, the company’s chief executive. “Our VoloCity is the fifth generation of Volocopter aircraft and has a strong path to being the first certified electric air taxi for cities.” 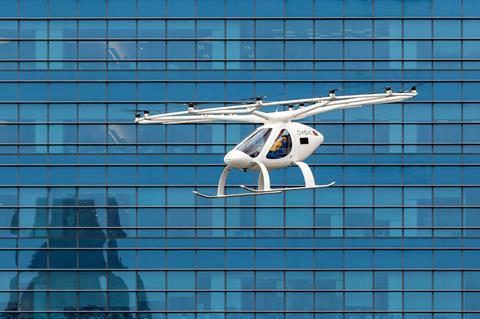 Volocopter secures another €200 million for development of its eVTOL

Volocopter has flown numerous demonstration flights in Helsinki, Stuttgart and Singapore and also secured a key European regulatory approval towards certification of VoloCity in 2020. The European Union Aviation Safety Agency (EASA), Europe’s aviation regulator, granted Volocopter its Design Organisation Approval (DOA), the license to develop and build certified aircraft. That gives the company a clear pathway to commercial certification of its aircraft.

It has said it expects to launch operations in Europe in the next two to three years.

In January, the air taxi company also said it had received Federal Aviation Administration permission to pursue certification for flights in the USA.

While Volocopter  is pursuing certification in those two jurisdictions, it is also active in Asia, where it also expects to receive regulatory approval to conduct commercial flights within five years. Last December, Volocopter said it had committed to begin air taxi services in Singapore by 2023, with longer-term plans for cross-border flights.

The company conducted its first manned air taxi demonstration flight in Singapore in October 2019 and is continuing tests and flight trials.

Last September, it also joined forces with Japan Airlines and is targeting a commercial launch in Japan in the next three years.