The milestone marks further expansion by rapidly growing Wheels Up, which operates a private-aircraft membership programme and has in recent years completed several major acquisitions.

Wheels Up is now listed on the New York Stock Exchange under the name Wheels Up Experience. It became publicly traded by merging on 13 July with a special purpose acquisition company called Aspirational Consumer Lifestyle, which had already been publicly listed. 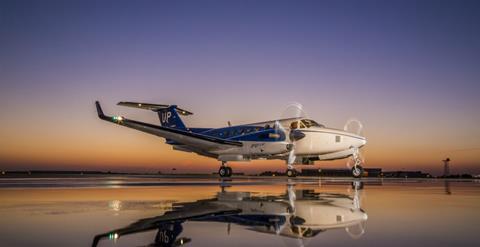 Wheels Up raised $650 million through the deal, funds that will help “accelerate investment in… technology and product offerings, driving the company’s core global growth strategies and expansion of the Wheels Up marketplace”, Wheels Up says on 14 July.

Wheels Up has had a busy few years of expansion.

As of late June, Wheels Up’s fleet, including aircraft owned by partners, stood at about 1,500 private aircraft. Of those, 170 are owned or leased by Wheels Up, roughly 170 are managed by Wheels Up and some 1,200 are “third-party network aircraft”, meaning they are operated by partner companies that provide flight services to Wheels Up.