Biman Bangladesh Airlines has been awarded rights by Chinese regulators to fly two routes into China, paving the way for its first flights between Bangladesh and China.

According to Cirium schedules data, there are already airlines that ply both routes. On Dhaka-Guangzhou, China Southern Airlines and Bangladeshi carrier US-Bangla Airlines both fly daily currently.

Separately, Myanmar Airways International was awarded rights to fly from Mandalay to Hangzhou, as well as Zhengzhou. CAAC also awarded the carrier up to twice-weekly rights to fly Yangon-Hangzhou.

If it chooses to commence services, it would be the first carrier from Myanmar to do so.

In total, the CAAC also awarded rights for 14 routes to and from various points in China. These include allocating Egyptair rights to fly to its third Chinese city of Shanghai from Cairo. 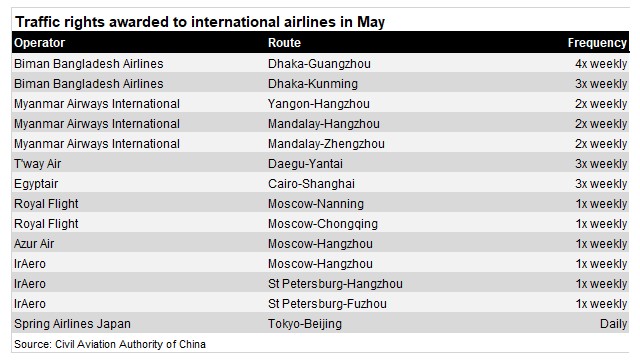