The UK Royal Air Force will continue operating its remaining Lockheed Martin C-130J tactical transports until 2035, with their service-life extension to be supported by a key structural upgrade programme.

Announced by the Ministry of Defence on 14 July, a new, £110 million ($143 million) contract will lead to the UK's Marshall Aerospace and Defence Group replacing the centre wing boxes on 14 stretched-fuselage C-130J-30s, designated C4s by the RAF. 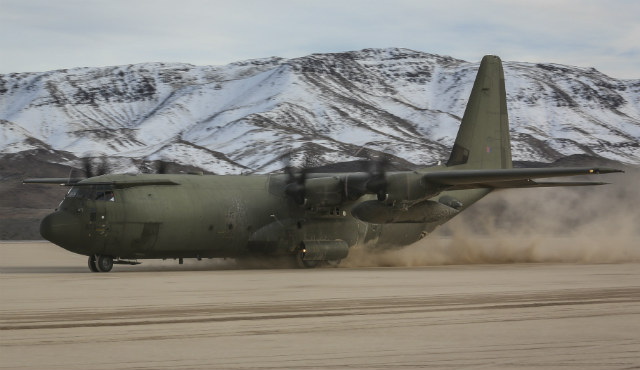 The UK company will replace the C-130J's existing centre wing box with an enhanced service-life design produced by Lockheed. "The units provide durability enhancements and allow sustained centre wing service life that is two to three times longer than the original centre wing boxes," Marshall says. The work will be conducted at its Cambridge airport site in Cambridgeshire.

"This [centre wing box] replacement will extend the C-130J's out-of-service date to 2035, making sure this essential aircraft can continue to transport personnel and equipment around the world," the MoD says.

In a controversial move, the UK government's Strategic Defence and Security Review of 2010 proposed removing the RAF's entire C-130J fleet from service. But with the service facing a looming tactical airlift shortfall and delays to the introduction of tactical capabilities for its incoming Airbus Defence & Space A400M Atlas, this decision was partially reversed in its 2015 review, which identified a need to retain 14 Hercules.

Flight Fleets Analyzer shows the RAF's C4-model C-130Js as being aged between 17 and 21 years. Its short-fuselage C5-standard examples have already been retired from use or placed in storage. The UK acquired an original 25 "Super Hercules", with one having been destroyed after sustaining damage from an improvised explosive device on landing at a remote airstrip in Iraq in 2007.

The UK's Hercules fleet is based at RAF Brize Norton in Oxfordshire, along with 16 of the service's eventual 22 A400M tactical transports.

RAF operations with the C-130 began in 1966 and Marshall has been involved in supporting the type since its introduction. The company, Lockheed and AE2100D engine supplier Rolls-Royce currently provide sustainment and upgrade services to the MoD via the Hercules Integrated Operational Support contract.