The Avicopter AC313 has achieved type certification in China, clearing the way for it to enter the commercial market.

The helicopter underwent four years of research and development, and is China's largest domestic civilian helicopter to date, said an Avicopter spokesman.

It foresees a number of missions for the AC313. These include search and rescue, fire fighting, offshore operations, cargo and medical evacuation.

The spokesman added that the AC313 is particularly well suited to high altitude operations. Trial flights reaching an altitude of 8,500m were conducted on the Tibetan Plateau. 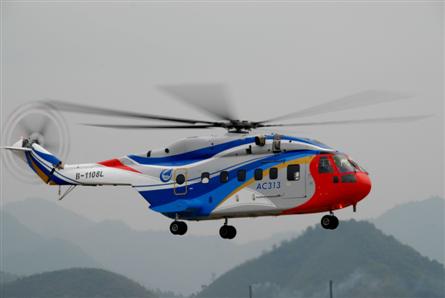 The aircraft is based on the Harbin Z-8 military helicopter, a derivative of the Aerospatiale SA321 Super Frelon that first flew in 1962.

The AC313 is powered by three Pratt & Whitney PT6B-67A engines, and can seat up to 27 passengers and two crew.

Avicopter has said that it intends to apply for validation in Europe and the US for the AC313.