Air China, Juneyao Airlines and Shenzhen Airlines are among five airlines have filed applications with the Civil Aviation Administration of China (CAAC) to start new routes to six points in Japan.

Shenzhen Airlines is seeking to fly daily from Wuxi to Nagoya and Sapporo from September. Kunming Airlines, Air China, Juneyao Airlines, as well as Spring Airlines each filed one route application.

Kunming is seeking to fly thrice-weekly Kunming-Lianyungang-Osaka from October, while Air China applied to operate Hangzhou-Fukuoka thrice weekly from September.

Juneyao is seeking rights to operate daily flights on Nanjing-Aomori from August, and Spring applied to fly thrice weekly between Chengdu and Hiroshima from September. 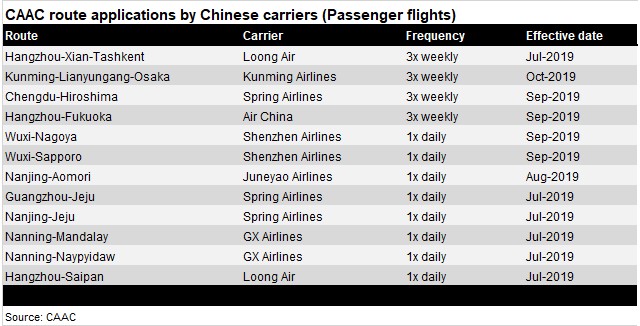 In total, the CAAC received 14 applications from the carriers, including routes to Central and South Asia, Europe and the Pacific.

Loong Air is looking to operate Hangzhou-Xian-Tashkent services thrice-weekly from July. Schedules data shows that the other airlines that fly between China and Uzbekistan are China Southern and Uzbekistan Airways. Both airlines fly twice weekly both Urumqi and Beijing to Tashkent.

GX Airlines applied to operate daily to from Nanning to Mandalay and Naypyidaw. That would see it compete with Donghai Airlines, which flies twice weekly between Nanning and Mandalay.