Integrating unmanned air systems (UAS) into civil airspace in the United States is one of the toughest jobs the nation's aviation industry has ever faced, according to the leader of the Air Traffic Control Association (ATCA) trade body.

The group held a UAS-focused conference on 24 January near Washington, DC, during which attendees detailed many of the issues they say must be overcome before UAS become common in US skies.

“Integrating UAS is the hardest thing we have ever done,” Peter Dumont, president of ATCA, says.

He likens the problems posed by the booming UAS industry to those caused by the widespread introduction of jet-powered aircraft in the middle of last century, only “more difficult.”

The challenges are both practical and regulatory, requiring both technological advances and a host of new certification standards for aircraft, systems and pilots, Dumont says.

Speakers at ASTA’s event - the first of its kind held by the group - included representatives from the FAA, the US military and private industry.

Visual identification of other aircraft - the “see and avoid” principle - can be “difficult from computer screens,” says Smith, whose company manages air traffic, including US military UAVs, at the Southern California Logistics Airport in Victorville, California.

Responses to air traffic control instructions by unmanned aircraft are also delayed, as messages must be relayed via operators on the ground before the necessary control inputs are made, says Smith.

Some of those concerns are familiar to Ted Schultz, who flies General Atomics MQ-9 Reapers for the US Air Force. Schultz told attendees that spotting other aircraft - both those in the air and on the ground - on monitors in an MQ-9 control station (below) can be difficult. 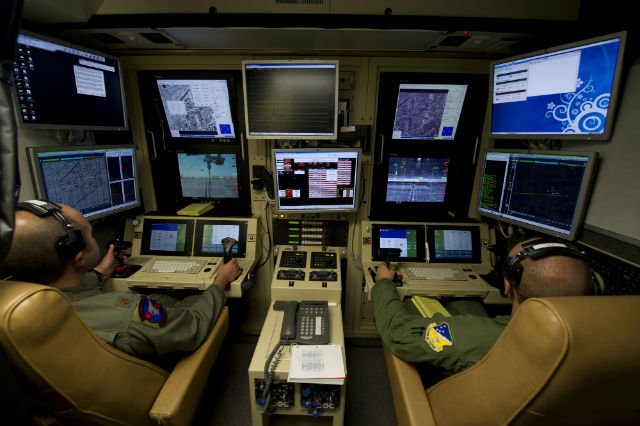 Also, he says actions that are simple to perform in a manned aircraft can be protracted tasks in some UAVs. For instance, he says, if an aircraft is ask to identify itself all the pilot has to do is push the "ident" button on the transponder.

But to undertake the same operation for an MQ-9, an operator must open a “tools” menu using a mouse and then find the identify command, he says.

Those steps take time and can be distracting, particularly while simultaneously manoeuvering the Reaper. “That’s just an example of many issues we deal with,” he says.

Mack Coker, who directed air traffic at a base in Iraq for the US military, says UAS created challenges because they flew pre-programmed flight paths.

Therefore, Coker says the AAI RQ-7 Shadow drones that operated from the base were kept in a “segregated” environment, operating from a dedicated runway.

“For five minutes [from takeoff] they flew GPS points out of our airspace. They were not flexible at all,” Coker says. “We kept all traffic out of their way, and it worked.”

Other concerns include the need for a UAS to be protected from hacking and the need to establish procedures to cope with a “lost link” between an air vehicle and its operator.

Paul McDuffee, vice president of government relations and strategy at UAV maker Insitu, says that unlike many other countries, the US has an “open skies”-style airspace. Its crowded with large commercial airliners and small private aircraft, he notes, which creates risks that are relatively unique to the US, he says.

Industry and air traffic controllers say problems can be solved, but much of the work lies with the FAA, which has embarked on a multi-year project to create a host of UAV regulations, including those covering pilot and aircraft certification.

The agency is required by the FAA Reauthorisation Act of 2012 to integrate UAS into US airspace by September 2015. Though some members of the industry credit the FAA for recent progress, there is a widespread belief that next year's deadline will be missed.

But Jim Williams, head of the FAA’s UAS integration office, expresses confidence in the agency’s progress and says it will fulfill its obligations. “We will integrate UAS in a measured and systemic manner,” he says.

One of the FAA’s first goals has been to publish a “small UAS’ rule that is expected to allow commercial flights of UAVs weighing less then 55lb (25kg).

Currently, commercial UAS flights are largely prohibited, except for a handful of companies who receive exemption from the restriction to conduct test or demonstration flights.

Though the small UAS rule was expected to be published years ago, progress has been slow.The FAA recently announced it will release its proposed rule in November 2014, to be followed by a period of public comments and then possible revision.

It’s a pace that McDuffee describes as “glacial.” Industry has speculated it may be another couple of years before the final rule is published.

Still, McDuffee sees progress. He says the FAA and the industry are collaborating better than ever and thinks the agency is now recognising it can safely open some areas of airspace to small UAVs.

Those documents will include standards covering flight manuals, maintenance and aircraft design and production, McDuffee says.