Airbus Defence & Space has completed the latest phase of an in-flight refuelling test campaign involving its A400M and a pair of combat search and rescue helicopters, and says certification approval for the tanker enhancement is expected late this year.

Some 81 “wet” contacts were made between the Atlas and two French air force Airbus Helicopters H225M Caracals, with a total fuel transfer of 6.5t, the company says. For the first time, this included both rotorcraft – operated by test pilots from the nation’s DGA defence procurement agency – receiving fuel at the same time. 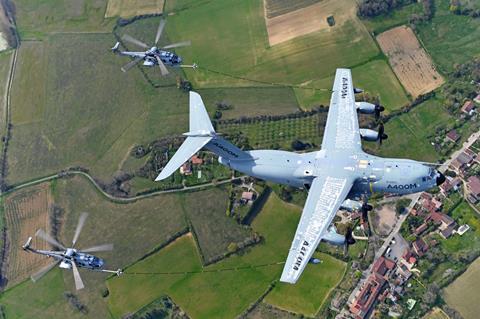 Its activity completed “the majority of its development and certification objectives”, the company notes, and “confirmed the positive results of the dry and wet contact operations conducted in 2019 and 2020”.

Airbus notes that the A400M “is certified as standard to be quickly configured as a tanker”. A baseline fuel load of up to 50.8t carried in the wing and centre wingbox can be augmented through the installation of two cargo hold tanks, each with a 5.7t capacity.

The company says it “aims to achieve full helicopter air-to-air refuelling certification later this year, with the conclusion of all mandatory night operation trials”. It notes that this functionality is “key for special forces operations”. 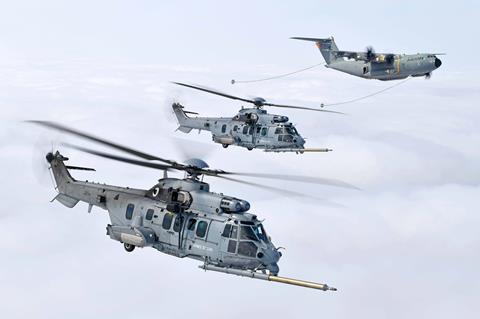 “With this [helicopter] capability the A400M becomes one of the few tanker aircraft in the world capable of such operations,” it adds.

The DGA on 16 April announced the receipt of France’s 18th A400M, from a 50-unit order. With the registration 0110, it is the nation’s first example to have been transferred with the cargo hold tank enhancement. 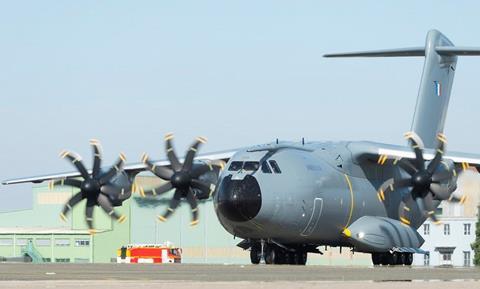 It also is cleared to drop up to 116 paratroops in a single pass from its side doors. Previous examples were restricted to deploying a maximum of 30 from one door, the DGA notes.