Boeing took a fresh $402 million pre-tax charge against its KC-46A tanker programme in the fourth quarter of last year, the company disclosed in its full-year results for 2021. 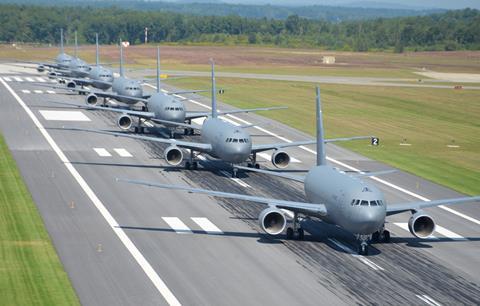 Last year’s shipments included the 50th KC-46A to be delivered to the US Air Force (USAF), which has a total requirement for 179 of the 767-based type. The milestone aircraft was transferred to Joint Base McGuire-Dix-Lakehurst in November.

The company has not detailed the factors behind the new charge against its USAF tanker programme, but has been working to resolve issues with its refuelling boom and associated remote vision system.

Boeing Defense, Space & Security ended the year with a backlog valued at $59.8 billion, with one-third of this sum being from non-US customers.

Worth almost $398 million, the Phase 2 modernisation deal for Riyadh’s five-strong AWACS fleet will support operations until 2040.