Boeing has secured a contract worth up to $9.8 billion related to modernisation and support work for Saudi Arabia’s F-15 fleet.

The Foreign Military Sales (FMS) contract is expected to be completed by 2025, according to the US Department of Defense contracts web site. The work will be performed by Boeing in St Louis, Missouri. 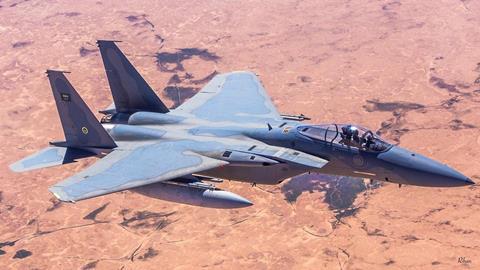 “This contract provides for modernisation and sustainment of the F-15 Saudi fleet to include such efforts as hardware, software, and interface design, development, integration, test, subsystem and structural component production and installation of future modifications and enhancements to the F-15 Saudi weapon system as well as product support,” says the contract notification.

The statement does not specify the variant of F-15 involved, although the Royal Saudi Air Force (RSAF) basically operates three types of F-15.

Cirium fleets data shows that Riyadh has 228 examples in service. Of these, 80 are F-15C/Ds with an average age of 37.8 years. That total includes 59 C-model aircraft used in the air defence role, plus 21 F-15D trainers.