Lockheed Martin has awarded CAE a subcontract to deliver a simulator and other ground-based training equipment for use by a joint French/German unit equipped with C-130J tactical transports and KC-130J tankers.

The US airframer’s Training and Simulation Solutions unit was last November selected to establish a binational training centre at Evreux-Fauville air base in France, to support operations from 2024. 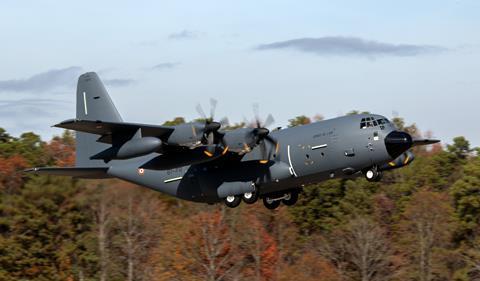 CAE on 5 January announced that it will “support the design, development and manufacture of a suite of C-130J training devices for the binational French and German training facility”.

This will include a full-mission simulator “capable of reconfiguring between the C-130J-30 airlifter and KC-130J tanker”, and a fuselage trainer for the instruction of loadmasters. “The training devices will be delivered in 2023,” CAE says.

Lockheed, meanwhile, will supply the centre’s learning management system and courseware, with options in place for it to deliver an initial five years of training services.

The French air force currently flies four Super Hercules as part of its C-130 inventory: two stretched-fuselage airlifters and a pair of tankers. Germany announced a six-aircraft acquisition via Washington’s Foreign Military Sales process in 2018, including three of each variant.

Lockheed says the German air force’s first two C-130J-30 transports are currently in production at its Marietta final assembly site in Georgia. “Delivery is anticipated to occur for all aircraft from 2022-2024,” it adds.

Both nations intend to operate their C/KC-130Js as a joint squadron. Lockheed notes that this represents a “first-of-its-kind partnership in the entire scope of 65 years of Hercules history, where the countries share the aircraft”.

France’s four new-generation Hercules are aged between one and three years, Cirium fleets data shows. Its air force also has 14 legacy H-model examples in use, the oldest of which entered service in 1975.