The US Congress appears poised to increase military spending beyond what Department of Defense officials requested, including expanded funds for several aircraft programmes.

The two congressional sub-bodies tasked with overseeing military matters, the Senate Armed Services Committee and House Armed Services Committee (SASC and HASC), on 16 June and 20 June respectively released drafts of their proposals for the fiscal year 2023 National Defense Authorization Act (NDAA). That is the bill that codifies defence spending for the coming year. 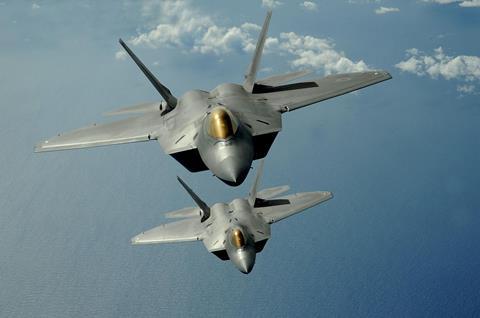 Members of Congress appear united in opposing a US Air Force plan to retire early versions of the F-22 Raptor, currently used for training

The HASC bill would provide an extra $37 billion beyond the $773 billion requested by Biden administration defence officials, while the Senate proposal contains an extra $45 billion in military funds. The House and Senate will ultimately have to agree on one plan.

The two bodies agreed on several points, including opposition to a US Air Force (USAF) plan to retire its oldest Lockheed Martin F-22 Raptor air superiority fighters, currently used for training missions. Both the House and Senate drafts would require the USAF to maintain a minimum number of aircraft in the F-22 fleet, citing concerns about the possible degradation of air combat power.

A similar requirement was placed on the US Navy (USN) concerning the maritime service’s fleet of carrier-capable Boeing EA-18G Growler electronic warfare fighters.

Also on the electronic warfare aircraft front, the SASC provided funding for the USAF to purchase four additional BAE Systems EC-37B Compass Call jets, which are meant to replace the service’s fleet of 14 Lockheed EC-130H turboprops.

The USAF currently plans to acquire 10 EC-37s, which are based on Gulfstream G550 business jet. The HASC draft did not include funding for the additional airframes.

Senators agreed to the USN request for 13 F-35C carrier variants and 15 F-35B short take-off and vertical landing variants for the US Marine Corps (USMC), but increased by seven the procurement of the conventional take-off and landing F-35A for the USAF.

Both bodies also support a Pentagon request for rapid prototyping of the Boeing E-7 Wedgetail airborne early warning and control aircraft, meant to replace the ageing Boeing E-3 Sentry that performs a similar role. The House plan would restrict the divestment of E-3s, pending the development of a strategy to roll out the Wedgetail.

There were also some points of disagreement between the two committees that will have to be reconciled.

The HASC draft also meets a Pentagon request to fund the purchase of 24 Boeing F-15EX Eagle II fighters, a major update to the venerable McDonnell Douglas air superiority fighter that made its first flight in 1972.

A summary of the SASC plan did not specify whether the body would ultimately support F-15EX funding.

Recently, Boeing Defense Services company officials with the F-15EX programme told FlightGlobal that modernised sensors and avionics will allow the older F-15 airframe design to effectively team with fifth-generation platforms like the F-22 and F-35, supporting air combat against an adversary’s advanced jets.

The House proposal also agreed to the USAF request to fund development of a sixth-generation fighter, currently known as the Next Generation Air Dominance (NGAD) programme.

The summary of Senators’ proposed spending plan released by the SASC did not specify support for NGAD. However the Senate draft does offer a $50 million increase in funding for developing “low-cost attritable aircraft”.

In the coming weeks, members of both chambers will review each other’s proposals and seek to craft a jointly agreed upon spending plan – one that appears set to be the largest ever passed.