Embraer has appointed its Portuguese subsidiary OGMA as a service centre provider for the A-29 Super Tucano turboprop trainer and light-attack aircraft.

Announced on 14 September, the step will lead to OGMA becoming “the first company in Europe, the Middle East and Africa to have these capabilities”, the Brazilian airframer says. 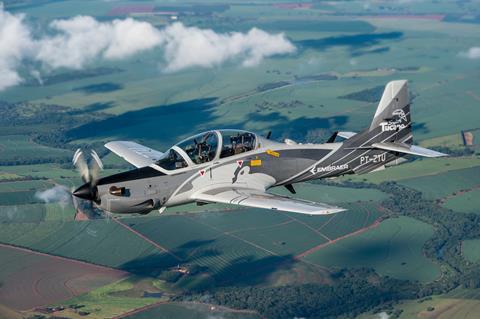 Under the arrangement, the European company will “perform support and maintenance for the A-29 Super Tucano, as well as future modifications to the aircraft to meet the requirements of current and future customers in the region”, Embraer says. The companies are at “the beginning of the engagement process” to establish the service, it adds.

The Super Tucano has enjoyed strong sales success with air forces in Africa, with the type currently operated by Angola, Burkina Faso, Mali, Mauritania and Nigeria. It also has secured one customer for the type in the Middle East: Lebanon. Cirium fleets data indicates that combined, these customers account for an active inventory of 34 of the aircraft. 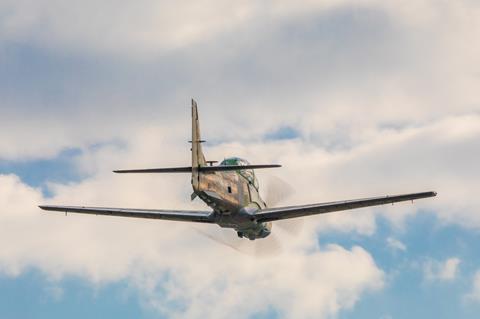 Nigeria is among Embraer’s African customers for the A-29

“The A-29 Super Tucano is generating a lot of interest in several European air forces,” notes Embraer Defense and Security chief executive Jackson Schneider. “Embraer, together with OGMA on the services field, is preparing to respond to the market by executing the modifications and technological evolution that are requested to meet various missions in the most effective way.”

Embraer is hoping to secure its first sale of the A-29 in the region, where it has already enjoyed success with the C/KC-390 transport and tanker, which is on order for the air forces of Hungary, the Netherlands and Portugal.

Embraer notes that OGMA already serves as European logistical support partner for its A-29 demonstrator aircraft, “allowing technicians to enable demonstration missions around the world for future customers”.