Greece has ordered another batch of six Dassault Rafale fighters, via a follow-on contract signed in Athens on 24 March.

“This new contract, which follows Greece’s acquisition of 18 Rafale in January 2021, will increase to 24 the number of Rafale operated by the Hellenic Air Force,” Dassault says. 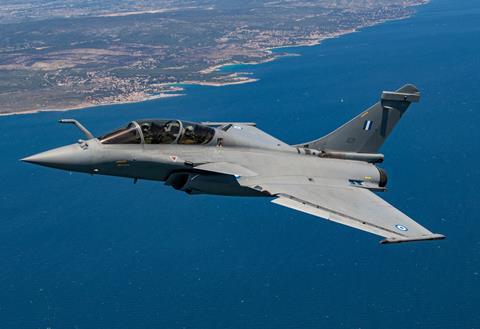 Athens’ earlier order included a dozen ex-French air force B/C-model aircraft, plus six new-build examples. Its lead batch of six aircraft was transferred to Tanagra air base on 19 January, and deliveries from this deal are due to be completed by “summer 2023”.

“The six additional Rafale will then be delivered to the Hellenic Air Force shortly thereafter, starting from summer 2024,” the airframer says.

“This additional order reflects the Greek government’s great satisfaction with the Rafale’s operational qualities, as well as its determination to strengthen the combat capabilities of the Hellenic Air Force in order to guarantee the country’s sovereignty and ensure the security of its population in an increasingly unstable geopolitical context,” Dassault says.

Cirium fleets data shows that the six fighters so far delivered to Greece include four single-seat Rafale Cs and a pair of B-model two-seaters. The secondhand assets are aged between 11 and 17 years.

Athens also on 24 March ordered three defence and intervention frigates from France’s Naval Group. The 4,500t vessels will be delivered to the Hellenic Navy by 2026.