Indian firm Dynamatic Technologies has secured a contract from Boeing to produce aerostructures for the F-15EX fighter. 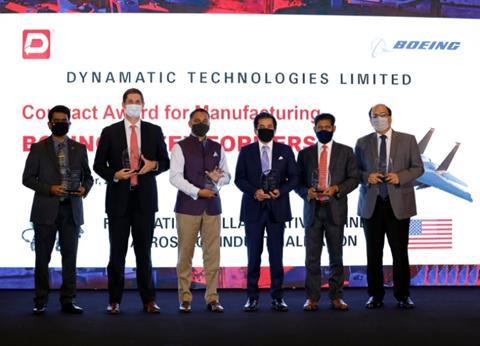 “Dynamatic has been associated closely with Boeing as a strategic tier-1 supplier partner for over a decade,” says Dynamatic’s chief executive Udayant Malhoutra. “The award for manufacturing aerostructures for the F-15EX Eagle II to Dynamatic is a testimony of our partnership with Boeing.”

The F-15EX is a contender in a major Indian air force requirement for 110 fighters. The US Air Force is expected to acquire up to 144 examples, the first eight of which were ordered in 2020.

Dynamatic will undertake the work at a factory near the Indian city of Bengaluru. The company provides aerostructures for several platforms, including the ailerons and wing flaps for the Hindustan Aeronautics (HAL) HJT-36 intermediate jet trainer, the forward fuselage of the Tejas fighter, as well as “major airframe structures” for the Sukhoi Su-30MKI, which is produced locally by HAL.

The company says it is also the sole provider of power and mission cabinets for the P-8A Poseidon maritime patrol aircraft – a type that the Indian navy also operates in the form of the P-8I Neptune. Dynamatic also has workshare on the CH-47 transport helicopter.

Moreover, Dynamatic has a location in the UK that does work for several major airframers.

“We see tremendous potential for India to contribute to the global aerospace industry as an industrial and technology partner,” says Gupte. “The award of aerostructure assemblies for the latest and most advanced version of the F-15 aircraft family is a reflection of Boeing’s focus on Aatmanirbhar Bharat and a testimony to the world-class capability of our industrial partners in India.”

New Delhi’s planned acquisition of 110 fighters is effectively a reboot of the 126-aircraft Medium Multi-Role Combat Aircraft (MMRCA) competition that selected the Dassault Rafale, but which collapsed in 2015 after negotiations fell through.

Like MMRCA, which required that 50% of the deal’s valued be ploughed back into India in the form of offsets, the new requirement will require significant investment in India, including local production.

Apart from the F-15EX, other contenders for the India fighter sale – informally dubbed ‘MMRCA 2.0’ – include the single-engined Lockheed Martin F-16V – re-badged ‘F-21’ for the Indian contest – and Saab Gripen E/F, alongside the twin-engined Dassault Rafale, Eurofighter Typhoon, as well as the F/A-18E/F Super Hornet. Russia is also likely to offer the RAC MiG-35 and Sukhoi Su-35.