Airbus Defence & Space’s A400M export deal with Indonesia – first disclosed in November 2021 – has been finalised, according to the company’s head of military aircraft, Jean-Brice Dumont.

“I am pleased to announce that this contract has entered into force, which means that in programme terms T0 has been achieved,” Dumont said during the airframer’s annual Trade Media Briefing event in Getafe near Madrid on 12 December. This milestone clears the way for the launch of production activities for the Indonesian air force. 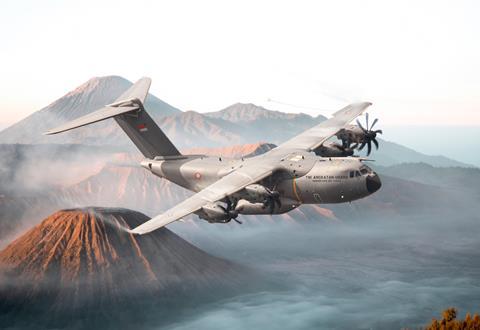 Indonesia will receive its initial two transport/tankers from 2026

Jakarta’s order is for two of the tactical transports, to be delivered from 2026, with an option to potentially later boost its fleet to six examples. Its aircraft also will be configured for tanker duties.

Confirmation of the deal with Indonesia takes the A400M order total to 176 aircraft for 10 nations, of which Dumont says 116 have been delivered.