Jakarta and Seoul have reached an agreement about development costs related to the Korea Aerospace Industries (KAI) KF-21/IF-X fighter. 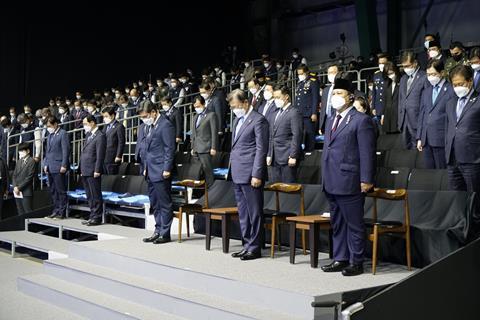 There is one notable change: while the value of Jakarta’s input into the programme remains unchanged, it will now provide 30% of its contribution “in kind.” DAPA says details of this will be hammered out later.

Cost sharing has been a bugbear for the programme for several years. DAPA says that starting from January 2019 six working level meetings were held over the issue.

“Although the final agreement was delayed due to the [coronavirus] situation, this agreement is very meaningful in that the two countries completed negotiations in a way that would benefit both countries through sufficient dialogue,” says DAPA director Kang Eun-ho.

DAPA adds that the agreement will help stablise the programme, and that Jakarta will cough up unpaid dues.

The “in kind” arrangement could see South Korea obtain additional Airbus Defence and Space CN235 tactical transports, which Indonesian Aerospace builds under license in Bandung. In 2018, a source told FlightGlobal that Jakarta was leveraging the KF-21 programme to obtain additional orders for Indonesian-built CN235s.

Thirty-two 32 Indonesian engineers are at KAI’s facility in Sacheon, South Korea working on the programme. This will grow to 100 by the end of 2021. Early in 2020, as Covid-19 swept the region, Jakarta had withdrawn personnel from South Korea.

DAPA adds that the fighter is currently undergoing ground tests, pending an a first flight in 2022.

The roll-out of the KF-21 Boramae – previously designated KF-X – took place on 21 April, with Indonesian defence minister Prabowo Subianto in attendance. Jakarta is expected to take 50 of the 170 examples produced.

The aircraft is powered by a pair of GE Aviation F414 engines.