The contract will run for three years, and will see KAI supply maintenance, logistics support, and munitions management for the fleet, says the Korean airframer. 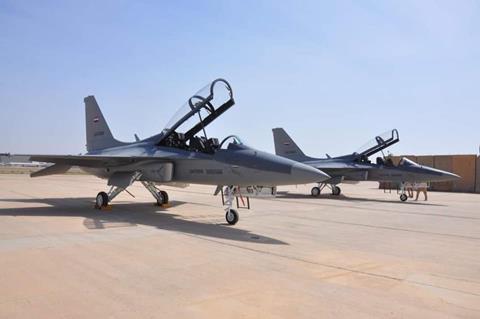 KAI says this marks the first major support deal signed with an international customer. It says that producing an aircraft accounts for about 30-40% of its lifetime cost, while supporting it over a 30-year service life accounts for 60-70%.

KAI aims to expand its support operation, nothing that there are 156 KT-1 basic trainers and T-50 series aircraft in service with international customers.

At the time of the Iraqi sale, a source told FlightGlobal that the T-50IQ is based on the most advanced version of the T-50, the FA-50, which can serve both as an advanced jet trainer and light attack aircraft.

In South Korean service, the FA-50 is equipped with the Link 16 tactical data link, a mechanically scanned array radar, radar warning receiver and a night vision imaging system. It is capable of carrying 4,500kg (9,910lb) of weapons, has a 20mm cannon and can carry air-to-air missiles. All T-50 variants are powered by the General Electric F404 engine.

KAI says it is working to increase the FA-50s range and expand its weapons capabilities.

In December 2020, Cobham Mission Systems said it will provide an inflight refuelling probe for the FA-50. The aircraft has also undergone tests with the Lockheed Martin Sniper Advanced Targeting Pod.

In early 2021, the FA-50 was cleared for the Lockheed Martin Sniper Advanced Targeting pod.  South Korea is not currently using the Sniper Pod, but the option is available for international customers.

Updated with FA-50’s clearance to use Sniper Pod.