MBDA has performed a second test firing of its Marte ER anti-ship missile in support of the long-range weapon’s integration with the Eurofighter Typhoon.

Conducted from a test range in Sardinia, the missile’s latest ground-launched firing “pushed its envelope to the limit”, MBDA says. “This firing confirmed the overall design and performance of the missile, marking a critical milestone in its development path,” the company adds. 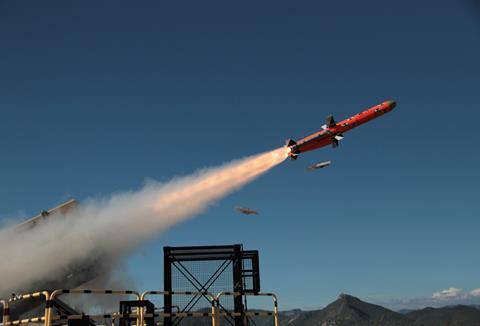 Several enhancements have been made to the 340kg (770lb), 3.6m (11.8ft)-long weapon since a first test firing conducted in late 2018, MBDA notes. New features tested recently include an integrated navigation system, proximity fly-over fuze with associated weapon controller and actuation system, and terminal guidance via a new seeker.

Following a flight of about 185nm (100km), including “very low sea-skimming at very high speed”, the weapon hit its intended floating target with an “almost zero miss distance”, the company says, hailing “perfect behavior of the missile”. It cites a maximum range of “well beyond 100km” for the high-subsonic-speed Marte ER.

The weapon’s pending addition represents a new capability for the multi-role Typhoon, with the anti-ship mission among duties to be performed by an export customer. Eurofighter’s current production backlog includes examples ordered by Kuwait and Qatar.

“Full integration of Marte ER on the Eurofighter Typhoon platform is proceeding at pace,” MBDA notes. 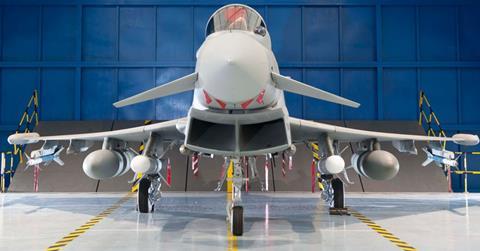