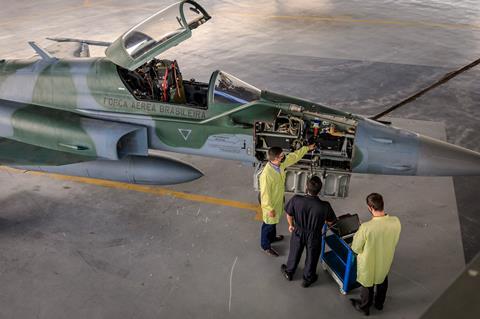 Cirium fleets data shows that Brazil has a 46-strong fleet of F-5EM/FMs, aged up to 47 years.

“The next phase of integration will be onboard Saab’s Gripen NG aircraft, while the Link-BR2 programme roadmap includes integration of the system capabilities onboard all of the FAB aircraft,” Elbit says.

Brazil will field a fleet of 36 locally-designated F-39E/F Gripens, with an initial example having been flown to the country so far to support evaluation activities.

Elbit notes that its E-LynX product range has also previously been selected by the armed forces of Israel, Sweden and Switzerland, plus Spain “and other NATO countries”.