New Delhi has formalised the acquisition of 56 Airbus Defence & Space C295 tactical transports, following the Cabinet Committee on Security’s blessing of the deal on 9 September.

The move caps a long-running effort to replace the Indian air force’s fleet of 60 Rolls-Royce Dart-engined HS 748 Avros with a modern tactical transport. 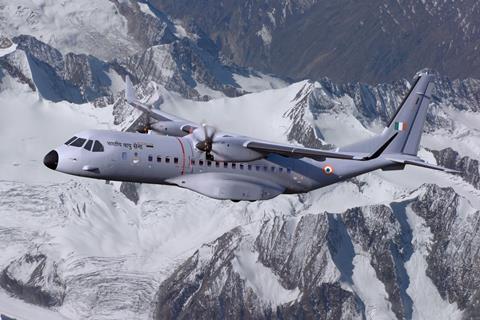 “It is the first ‘Make in India’ aerospace programme in the private sector, involving the full development of a complete industrial ecosystem: from the manufacture to assembly, test and qualification, to delivery and maintenance of the complete lifecycle of the aircraft.”

The first 16 aircraft will be produced in Seville, Spain and be delivered within four years of contract signature. The aircraft will feature a locally-produced electronic warfare suite.

The subsequent 40 aircraft will be produced domestically in India, under the auspices of the government’s ‘Make in India’ scheme. 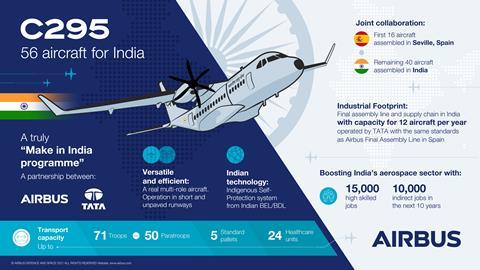 An infographic on the Airbus C295 offer to India

“This is a moment of pride for Tata and a milestone for the Indian military manufacturing ecosystem,” says TASL managing director and chief executive Sukaran Singh.

“For the first time, an Indian private company will be wholly manufacturing an aircraft in India. This endeavour demonstrates Tata Advanced Systems’ capabilities as a defence manufacturer to build globally competitive complex platforms in India.”