New technology additions will keep A330 MRTT ahead of the competition: Airbus

Airbus Defence & Space is furthering its pursuit of new technologies for use with the A330 multi-role tanker transport (MRTT), as it eyes major additional sales opportunities for the type.

Buoyed by the certification in mid-2022 of its A3R automatic boom refuelling enhancement for the adapted widebody – initially for use by the Republic of Singapore Air Force – Airbus is now planning to trial a further iteration of the system from next year. The planned A4R version will bring the ability to perform the in-flight refuelling of unmanned vehicles. 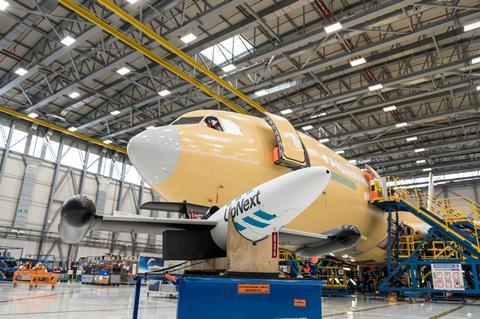 To be performed in tandem with the company’s UpNext technology accelerator unit, the pending A4R trials will involve its A310 MRTT testbed and an Airbus Do-DT25 tactical unmanned air vehicle.

“The demonstration will go step by step: formation flight, control, and then refuelling,” says Jean-Brice Dumont, the airframer’s head of military aircraft. “What is extremely critical initially is to ensure the safety of close flight, the controllability and the resilience of the control systems where you control the drone from the [tanker] aircraft.”

As with the company’s in-service A3R technology, the enhancement will be based on the use of the MRTT’s fly-by-wire-controlled refuelling boom. Ground-based testing is scheduled to begin at the company’s Getafe site near Madrid in January 2023.

Dumont describes the technology development work as “a feeder for what a remote carrier may need” for use as part of a European Future Combat Air System (FCAS) capability.

Airbus also is pursuing the integration of additional new capabilities for the A330 MRTT, with Dumont identifying work to enhance its self-protection equipment and provide extended connectivity; the latter to enable the platform to support FCAS operations for the French-German-Spanish programme.

“With the tanker becoming more and more a key asset, we need to have a level of self-protection more comparable to what we have on some fighters,” he notes. 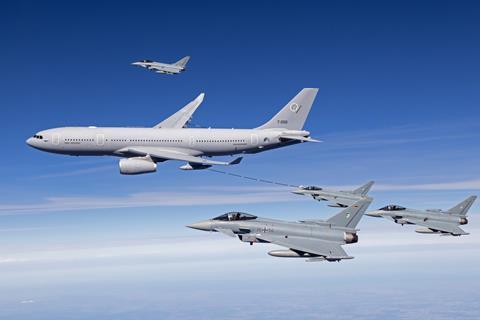 The A330 MRTT has been acquired by 14 nations so far

Meanwhile, Airbus expects to build on its current market success with the A330 MRTT: it has so far delivered 54 examples from a total of 66 ordered by 14 nations.

“We see a very promising worldwide market, [of] around 90 aircraft in the couple of decades to come,” says Dumont. That projection excludes the USA, where the A330-200-based LMXT platform is being promoted by local prime contractor Lockheed Martin for the US Air Force’s expected “bridge tanker” requirement.

“We see additional orders from our [existing] customers, realising that there is a ratio of fighters per tanker that motivates them to order more,” Dumont says.

New customer Canada is expected to acquire six A330 MRTTs, including assets to be converted from secondhand aircraft. Ottawa is currently completing a strategic planning activity ahead of confirming the deal, after a selection announced in April 2021.

“We see the secondhand market for the couple of years to come as quite promising,” Dumont said during the company’s annual Trade Media Briefing event in Getafe on 12 December. “Many customers are considering for cost-efficiency reasons to have a cheaper ‘green’ aircraft. We see customers – Canada, Spain, and a few others – asking for secondhand bids.”

Airbus also will in the first quarter of 2023 respond to a recent request for proposal from Brazil to modify two ex-Azul-operated A330s to the MRTT configuration.

“We needed time to mutually understand each other, as they are secondhand [aircraft],” Dumont says. “As we speak, we are putting our offer together,” he adds.

The Brazilian air force is currently operating one of the future KC-30 aircraft in a passenger configuration, following its arrival at Galaeo air base in July 2022. 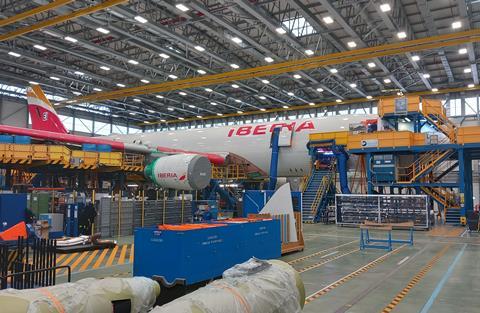 Airbus performs MRTT conversions in Getafe, with current examples at the site including a new-build aircraft for the French air force and an ex-Iberia-operated example now in modification for the Spanish air force. Conversion activities typically take nine months to complete per aircraft.