The company says the PC-9s will enhance its “provision of aerial training services, specialised joint terminal attack controller and close air support training to the German armed forces and other international customers”. 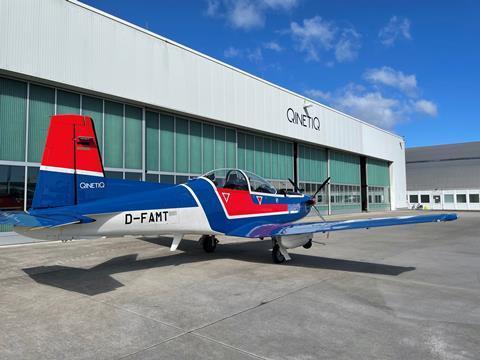 Qinetiq GmbH now has a dozen PC-9s in use

Qinetiq already had three of the Swiss-built type in service before adding the recent arrivals. Along with two PC-12NGs, the type is employed during tasks such as “target towing, close air support, maritime air operations, ground control intercept training and air traffic control training”.

Each PC-9 can deploy up to two towed targets, “with a distance of between 3-5km from the aircraft”, the company says.

Cirium fleets data indicates that the company’s PC-9s were previously operated by the air forces of Croatia and Switzerland, along with German training provider Condor, and are aged between 25 and 36 years.

The company will provide its new DA62s to deliver intelligence, surveillance and reconnaissance (ISR) services, or for use as training platforms by “national and international customers”, it says. Qinetiq and sensor provider Hensoldt have integrated an ISR suite “which provides airborne data acquisition on land and at sea”, it adds.

Cirium data shows that the first DA62 has already entered use, with the registration D-IBMT.

“With some of the most highly technical equipment, these new aircraft are ready for today’s and tomorrow’s challenges,” says Qinetiq GmbH managing director Graham Ollis. “Germany and NATO forces need to maximise their defence capability and be fully prepared for all potential military engagements that can occur around the globe,” he adds.