It has taken delivery of the first of the aircraft, which was ferried to March Air Reserve base in California, says the company. The remaining three will arrive this month and in November. 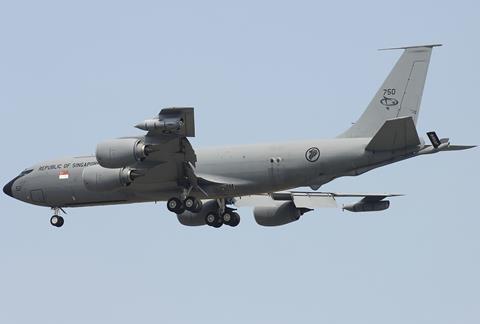 “With its extensive defence-as-a-service offerings and air mobility experience, this addition of four KC-135R aircraft enables Meta to deliver turnkey aerial refuelling services to meet our US government customer’s requirements,” says the company.

Meta Aerospace has its headquarters in Washington DC and employs 600 people. It describes itself as an “information-age aerospace, defense, and security platform that designs, builds and delivers cutting-edge, turnkey solutions for its partners, throughout domains and across a wide variety of missions”.

Singapore retired its KC-135Rs in June 2019 and replaced them with six Airbus Defence & Space A330 Multi-Role Tanker Transports (MRTTs).

In March, the USAF issued an industry day brief where it said it wanted to contract 5,000 flight hours of privately-operated in-flight refuelling tanker services, supporting around 1,100 sorties annually.

It is apparently keen to boost its tanker numbers so that it can quickly move large numbers of combat aircraft across the Pacific in case of a conflict with China. It is short of fully operational tankers owing to delays with the Boeing 767-based KC-46A Pegasus.

Several companies expressed interest, including Lockheed Martin and Airbus with a potential offering of the A330 MRTT.