Saab has successfully test-flown a 3D-printed replacement fuselage part on a Gripen D, demonstrating the technique’s potential application in temporarily repairing battlefield damage incurred while the fighter is deployed at a forward operating base.

Conducted from Linkoping in Sweden on 19 March, the activity involved fitting a replacement access hatch on the fighter’s aft fuselage. Produced for demonstration purposes after performing a scan of the original component, this was formed from a nylon polymer resin using additive layer manufacturing (ALM) techniques. 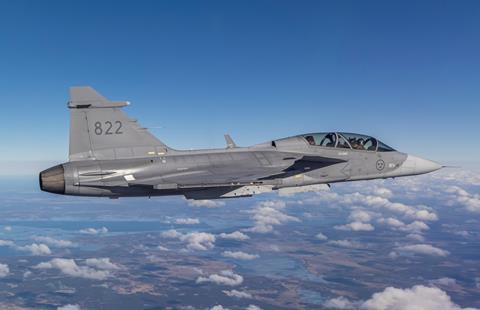 “Post-flight testing of the hatch showed that no structural changes had occurred,” says Saab, which says the component passed its first test “with flying colours”. Further analysis of the part is to be conducted by the Swedish AMEXCI consortium which produced it, with the results to help inform decisions around additional future testing.

Goran Backlund, the chair of Saab’s cross-business unit additive manufacturing group, says the goal of producing such parts at a forward-deployed base is “to keep the mission going while a replacement part is being delivered”. Printed components could be suitable for use during a handful of flights, he notes, but are not intended to match the durability of full-production equivalents.

Saab notes that by taking such an approach, an operator could reduce the volume of spare parts required to support a deployment, and remove the need to “cannibalise” other aircraft.

“We work with a low logistic footprint on the Gripen,” notes Niclas Kolmodin, the head of Saab’s support business unit for the type. “To bring as little as possible when we go out to the field is one of the main drivers. We wanted to see how well additive manufacturing could fit into that concept.”

Saab is exploring the potential for an operator to deploy a mobile 3D-printing repair capability, with the intention of housing this within a pair of 6.1m (20ft)-long ISO-type shipping containers. Current technology would allow for 60 x 60cm (2 x 2ft) parts to be produced, but Backlund says that this could in time be increased to 3 x 3m.

The hatch chosen for the flight demonstration provides access to chaff and flare dispensers, so is frequently removed. “When it is off the airplane, there is always risk that someone steps on it, or drives over it – so if you need it, you can’t fly,” Backlund says. 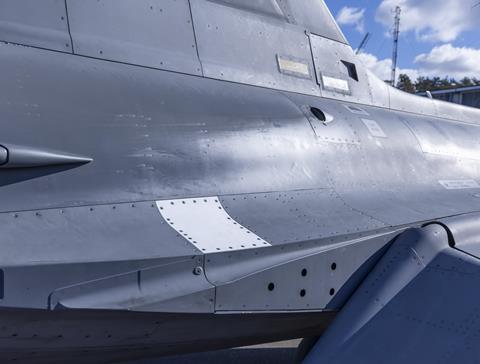 Saab says the next phase of its research will involve looking at the use of other materials with greater flexibility and the ability to withstand cold temperatures at high altitude.

“We will continue to develop the concept, to see which parts can utilise this technology,” Kolmodin says. “This was a quite simple structural part: can we do more complex ones?”

Backlund notes, however, that the ability to produce larger, temporary flight-critical surfaces such as flaps would involve “a lot more work”.

In late 2017, Saab co-founded the AMEXCI consortium to advance the use of ALM technology, which it plans to adopt more widely on equipment produced across its six business units.

“Our mission is to spread the technology across Saab,” says Backlund, who is also chief technology officer at its Dynamics unit, which produces equipment including air-launched weapons. “There is [also] an interest from our customers,” he notes.

Saab already uses some 3D-printed parts in its manufacturing of the new-generation Gripen E, including on structural frames and as part of its electronic warfare equipment installation.