Saab to deliver six Gripen Es in 2021, as contest decisions near

Saab will deliver a combined six Gripen E fighters to Brazil and Sweden this year, as the manufacturer also pursues additional export opportunities for the new-generation type.

Four serial production aircraft will be transferred to the Brazilian air force during 2021, along with two to Sweden’s Defence Materiel Administration, says Jonas Hjelm, head of Saab’s aeronautics business area. 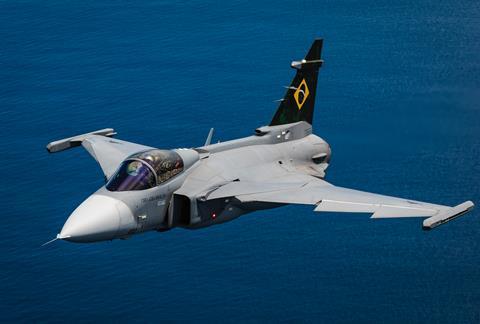 “We are following the timelines that we set out together with our customers,” he says, adding that this demonstrates “we have a mature and developed product.”

Saab has so far delivered lone examples of the GE Aviation F414-powered fighter to support evaluation activities by the Brazilian and Swedish air forces, which between them have orders for 96 examples.

Speaking during the company’s online annual Gripen seminar on 8 June, Hjelm said that it also is in the middle of a process to secure military type certification for the E model. “This is a very important point for us to deliver on the complete weapon system,” he adds.

Responding to recent reports suggesting that Brazil is to increase its commitment to the locally designated F-39E/F, Hjelm notes that the nation has long stated its intention to acquire more than its first 36-unit batch.

“They haven’t outlined in official communication or any negotiations when that can happen,” he says. “We need to deliver on our first contract, that the Brazilian air force gets operational aircraft, then it is more likely that we will start discussions on batch 2, or more aircraft for the future.”

“It will be a broad industrial participation and collaboration, and both Saab Brazil and our partner companies Embraer and AEL will be a vital part,” he says. Bogota is seeking a new type to replace its aged Cessna A-37s and Israel Aircraft Industries-produced Kfir fleets. 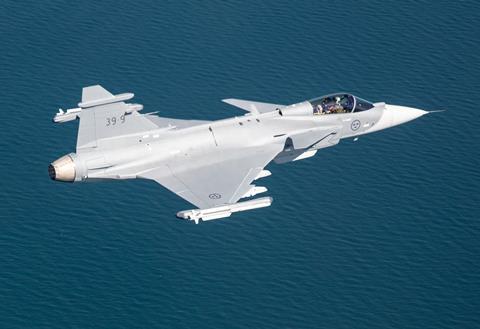 “We are looking forward to making the first [MBDA] Meteor firing in the next few months, hopefully,” he adds.

Saab is awaiting the outcome of Finland’s HX contest later this year, and has also responded to requests linked to planned fighter acquisitions in Canada and India – for 88 and more than 100 aircraft, respectively. It also is in “constant communication” with the Philippines about Manila’s acquisition plans, but “there are no negotiations”, he says.

“We are in discussions on how we will upgrade the aircraft to remain relevant over time,” Hjelm says, noting that he expects the Swedish air force to continue operating some of its current examples “long after 2030”.

Saab continues to pitch new-build Gripen C/Ds to potential customers, offering deliveries within a potentially 18-24-month period. Hjelm says the company has not yet identified a date for when it might stop promoting fresh production of the in-service model. “Obviously everything good has an end, but we are not there yet,” he notes.