The US Air Force’s second Boeing F-15EX Eagle II fighter arrived at Eglin AFB in Florida on 20 April, ahead of the service launching operational test and evaluation work on the new model. 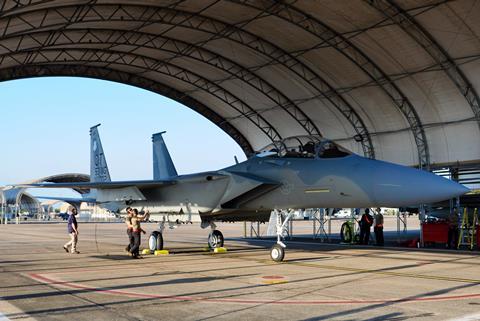 Boeing notes that the aircraft’s transfer from its St Louis final assembly line in Missouri was “earlier than the contract requirement”. A first example had arrived at Eglin AFB in March.

The USAF intends to acquire between 144 and 200 Eagle IIs to replace its aged F-15C/Ds, and ordered an initial batch of eight test aircraft last year.

Cirium fleets data shows that the USAF has a current 237 C/D-model fighters in active use, aged between 32 and 41 years.

“Moving from contract award to delivery in a matter of months enables the US Air Force to get a head-start on flight testing, and demonstrates our commitment to exceeding expectations,” says Boeing F-15 programme manager Prat Kumar.

“The 40th Flight Test Squadron and 85th Test and Evaluation Squadron will work together in integrated developmental and operational testing” of the EX model, the USAF says.