Pilatus has conducted the first engine run of a PC-21 trainer for the Spanish air force.

Photographed at the airframer’s Stans site in Switzerland on 2 December by Stephan Widmer, the lead aircraft has already been painted, and carries the air force registration E.27-01. 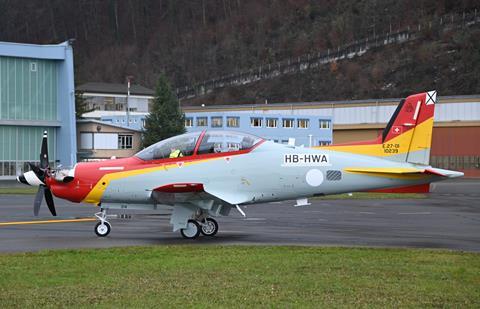 Madrid on 30 January 2020 signed a €204 million ($247 million) contract to acquire 24 of the turboprops, along with simulators and support services. At that time, it said the first six aircraft would be delivered in 2020.

Spain will use the Swiss-built type to begin replacing an aged inventory of 60 CASA C-101 jet trainers, which Cirium fleets data shows have been in use for up to 40 years.