Dassault Aviation has received the first payment from the United Arab Emirates (UAE) for the Gulf state’s purchase of Rafale fighters, bringing the contract into force and adding 80 aircraft to the French firm’s backlog.

Signed on 3 December last year, the agreement between France and the UAE is the largest ever export order for the Rafale. In addition, Abu Dhabi will be the first operator of F4-standard jets outside of Dassault’s home nation. 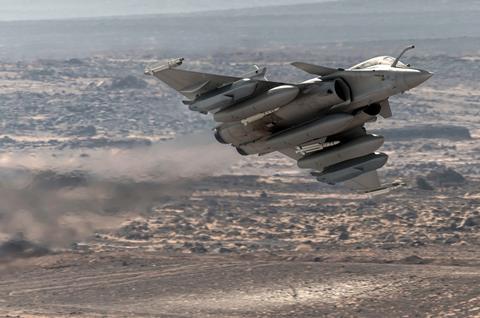 “The Rafale shows, through its proven operational qualities and its export success, that it is today a real ‘game changer’ on the global geopolitical scene and an undisputed instrument for independence and sovereignty.

“Dassault Aviation is fully committed to supporting the United Arab Emirates in its sovereign power, its strategic challenges and its ambitious vision of the future,” says Eric Trappier, chief executive of the French airframer.

At the end of 2021, Dassault had 86 Rafales in its backlog, of which 46 were for export customers Egypt, Greece and India.

So far this year Greece has already placed a follow on order for six additional aircraft, while Indonesia has tentatively committed to a 42-unit deal.