A US Navy Lockhed Martin F-35C Lightning II was involved in “a landing mishap” aboard the USS Carl Vinson aircraft carrier on 24 January, injuring seven people.

“The pilot safely ejected from the aircraft and was recovered via US military helicopter,” the US Navy says. “The pilot is in stable condition.”

Six other sailors were injured in the accident, which the navy said occurred while “conducting routine flight operations in the South China Sea”. Three of those injured required a medical evacuation to a treatment facility in Manila, the Philippines, while the other four were treated aboard the carrier. 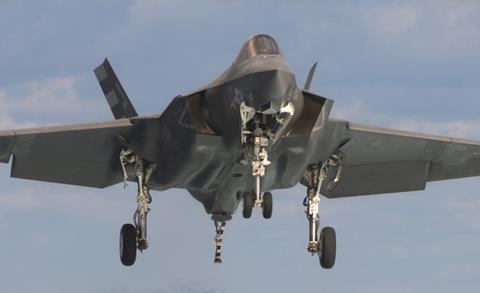 “Additional details and the cause of the in-flight mishap is under investigation,” the navy says. Little is known about the incident.

Lockheed, the jet’s manufacturer, did not immediately respond to requests for comment.

The aircraft is assigned to Carrier Air Wing 2 in the Pacific. The USS Carl Vinson is currently conducting operations in the region along with the USS Abraham Lincoln carrier group.

It is the third incident involving the fighter type in as many months. On 4 January, a Republic of Korea Air Force F-35A reportedly suffered a belly landing after developing unspecified avionics issues. The pilot landed the jet and walked away, uninjured. Last November, the UK Royal Air Force lost an F-35B in an accident in the Mediterranean. The pilot ejected from the aircraft and was not injured.