Beijing is gradually developing a modern air-to-air tanker capability, as it seeks to support advanced combat types at extended ranges.

Perhaps the single biggest challenge facing air forces in the Asia-Pacific is distance. To help overcome this, the US Air Force has substantial air-to-air tanker assets dedicated to the region, and the more advanced regional air forces such as Australia, Japan, Singapore, and South Korea have made substantial investments in tankers. 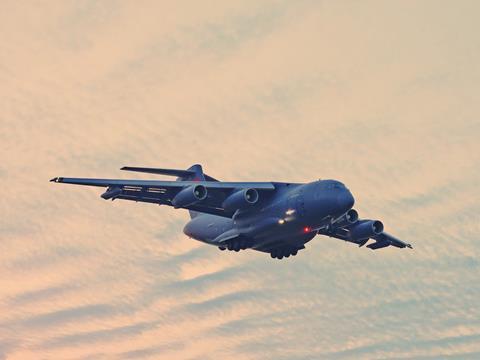 China has lagged in this key area, but aims to rectify this with a new tanker variant of its Xian Y-20 strategic transport, designated the Y-20U.

The need is pressing. The People’s Liberation Army Air Force (PLAAF) has tankers in the form of 24 elderly Harbin H-6Us, but these aircraft – derived from early iterations of the H-6 bomber – are powered by two gas-guzzling WP-8 turbojets, the Chinese copy of Russia’s old Mikulin AM-3.

This limits both speed and endurance – China’s advanced K, H, and N versions of the H-6 bomber have newer Soloviev D-30 turbofans. Moreover, the H-6U’s fuel capacity is limited compared with types such as the Boeing KC-135. The PLAAF also has three Ilyushin Il-78s.

The Y-20U, based as it is on a large transport, promises to offer far greater fuel capacity than the H-6U. Deployed in numbers, the H-20U will allow PLAAF planners to make better use of advanced types such as the Chengdu J-20, Shenyang J-16, Sukhoi Su-35, and H-6N (the only H-6 variant with a refuelling probe).

Evidence about the Y-20U first emerged in the late 2010s, with satellite photos showing the variant appearing in 2018. Finally, the second half of 2021 yielded a number of spottings, with the Y-20U conducting hose-and-drogue refuelling work with PLAAF J-16s.

In late November 2021, Taiwan’s defence ministry reported that a Y-20U participated in one of China’s daily incursions into its air defence identification zone. In a conflict over Taiwan, PLAAF tankers would allow tactical airpower to conduct ‘off axis’ attacks from unexpected directions. In addition, Chinese fighters and bombers would be able to engage US forces at greater ranges should Washington DC intervene militarily in a Taiwan contingency.

Roderick Lee, research director at the China Aerospace Studies Institute, says that Beijing views the ‘forward edge’ of the battlespace as pushing farther into the Pacific – as well as into the Indian Ocean. At present, the PLAAF is largely restricted to operations inside the ‘First Island Chain’, which runs from the Japanese archipelago in the north, down through Taiwan and the Philippines, to the tip of the Malay Peninsula.

In order to deter foreign intervention, it is key that the PLAAF operate out to the ‘Second Island Chain’, which extends from Japan through Guam to the South Pacific.

“It is extremely difficult to overstate the importance of air-to-air refuelling in future PLA air operations,” says Lee. “The primary issue is deterring/defeating US intervention – something that the PLA wants to do as far away from mainland China as possible. Without tankers, airpower cannot reasonably reach beyond the Second Island Chain – and that’s only with long-range munitions fired from unrefuelled H-6Ks.”

It is believed that three Y-20Us have been developed, and there is speculation that one, at least, has entered service. Images confirm that the Y-20U has refuelling pod under each wing. Some images suggest is that the aircraft has a third hose installed along its centreline.

The Y-20U appears to have had the rear cargo door removed, potentially to save weight and complexity, and features somewhat larger main landing gear sponsons. The full removal of the rear cargo door would appear to set the Y-20U clearly apart from comparable aircraft such as the Airbus Defence & Space A400M and Embraer KC-390, which can perform the full range of transport and tanking missions. 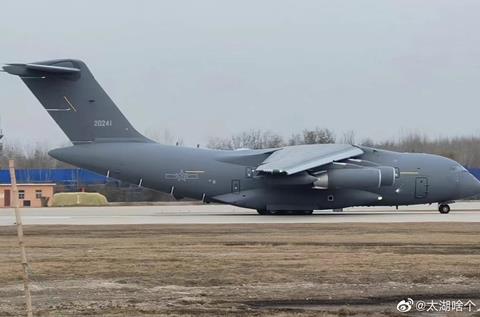 The Xian Y-20U at a Chinese air base

The Y-20U now in development may not be the ultimate realisation of the type. The size of the engine pods suggests that it is powered by four D-30KP-2s, the same powerplant as the Il-76 and baseline Y-20.

Images have emerged of Y-20s powered by the Shenyang WS-20 high-bypass turbofan. As the WS-20 programme matures, it is all too likely that the newer engine will make its way onto the Y-20U. The addition of the new engine would likely be coupled with other improvements derived from Beijing’s experience with its early Y-20U assets.

One challenge facing the Y-20U’s adoption is likely to be production capacity at Xian. While over 30 Y-20 airframes have been produced, it appears that a single production line produces both the baseline Y-20 transport and Y-20U tanker variants. Given the PLAAF’s increasing transport obligations, leaders will need to make trade-offs between this and the tanking mission.

“Although we’re seeing [Y-20Us] involved in operational activities, I don’t know if I would consider it a fully operational capability at present,” adds Lee.

“I think they are doing a lot of operational testing and demonstrating the capability, but the extremely low numbers and limited time in service suggest to me that it’s still a work in progress.”