Imagine reclining on a sofa on your business jet with a pilot’s-eye view through the cockpit window.

Imagine reclining on a sofa on your business jet with a pilot’s-eye view through the cockpit window.

That’s the panoramic vision Lufthansa Technik is offering private owners of Airbus A220s, even though Toulouse has yet to launch a corporate version of its smallest airliner. 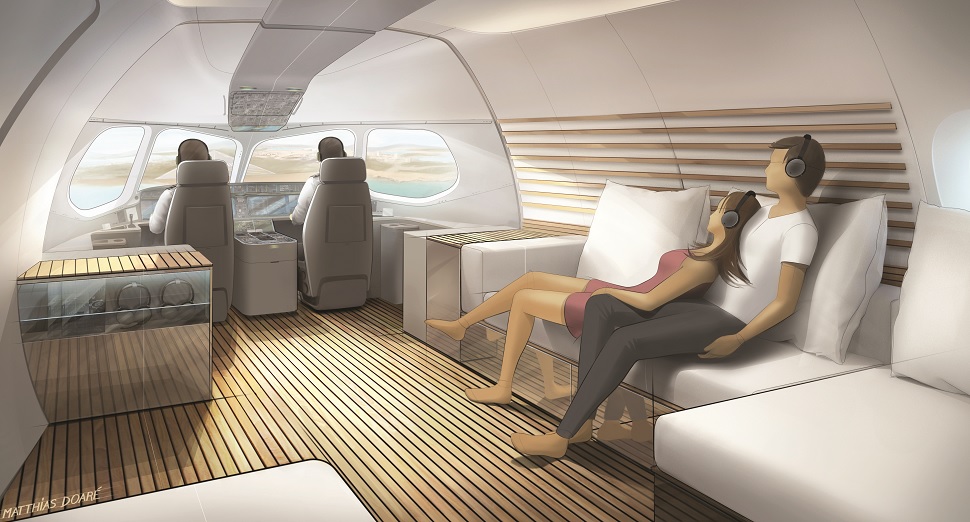 The Hamburg-based MRO and completions specialist earlier this year quietly previewed its SkyRetreat concept for the former Bombardier CSeries – where the cockpit bulkhead is moved just aft of door one, to create an “observation deck” containing an L-shaped divan directly behind the pilots.

However, it is pushing it at Dubai because it believes there could be significant demand in this region.

“There is huge potential here because of the customer change in the market,” says Wieland Timm, head of sales VIP and special mission aircraft. “There is a younger generation getting more wealth who are going to be attracted to more modern types, with roomier interiors and fewer small rooms. Those are who our concept is aimed at.”

Lufthansa Technik says the interior would only be permitted for a privately-owned aircraft, and not those carrying paying passengers.

Around a decade ago, the Middle East was one of the hottest markets for business aviation – but terror threats, civil wars and political and economic upheavals have all contrived to slow demand. But Timm believes there could be scope in the next few years in the head of state segment, where several older jets are due for replacement.

“Some government aircraft are nearly 20 years old, so we see potential for several fleet roll-overs for newer-generation types,” he says.

However, he is doubtful that any Airbus A380s will end up as head of state aircraft, 10 years after a Saudi prince commissioned the first VIP version of the superjumbo at the Dubai air show. That order was subsequently cancelled.

The double-deck type is too structurally restricted to appeal as a bespoke luxury private aircraft, says Timm, although he does see a possible afterlife for the soon-to-be out of production type as a “flying cruise ship”.