Given that the lion’s share of Boeing’s backlog for the 777X is from Middle Eastern operators, it seems apt that the company is showing a cross-section of the new big twin featuring seating in a 10-abreast economy-class layout. 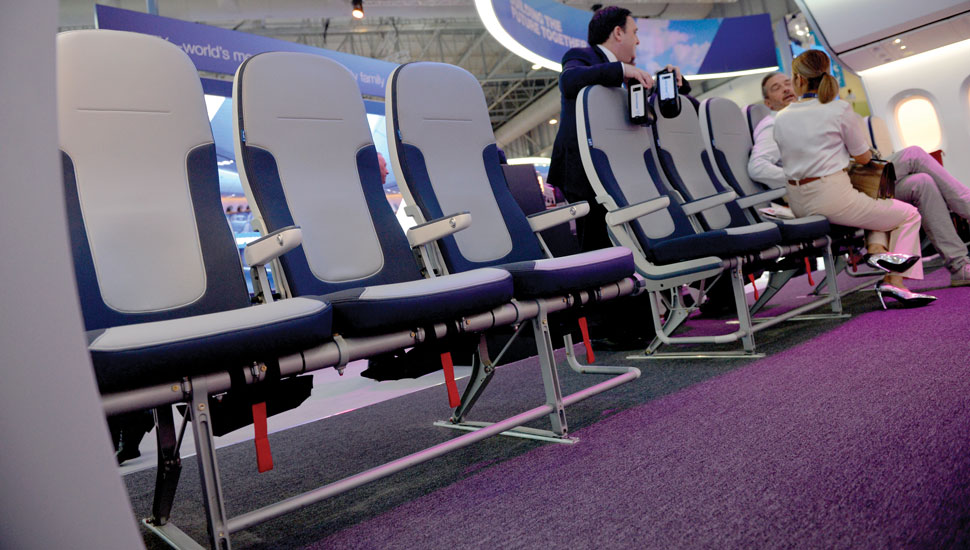 Those seats are from partner Lift by EnCore, which, although designed for short-haul applications, feature the same 18in width as a model for widebody aircraft.

Boeing is keen to emphasise that the 777X’s fuselage, which is 0.4m (14in) wider than that of the Airbus A350, can comfortably accommodate the configuration.

Adient Aeropace is also showing its new Ascent business-class seat as it works towards service entry for the model with launch customer Hawaiian Airlines in 2021.

To be installed on the carrier’s incoming fleet of Boeing 787-9s, the Ascent seat features a sliding central partition and aisle-facing privacy screen that would allow a couple to turn a pair of central seats into what the company calls a “Cabana”.

Adient Aerospace was launched in 2018 as a joint venture between Boeing and German automotive seat manufacturer Adient.

So far, the Ascent seat is its only product, but the company has a “vision to create a full portfolio of products”, says Gary Senechal, vice-president of sales, marketing and communications.

Although he declines to be drawn on what will be developed next, the company could address a requirement for equipment on Airbus jets. “I think there’s certainly a market for a single-aisle design for A320s. Lift is optimised for the [737] Sky interior so I think it will be smart for us to pursue an A320 solution.”