While all the talk in the run-up to the Dubai air show was about the prospects for large commercial orders being announced, it was the United Arab Emirates air force that opened sales, with a surprise, $1.27 billion contract with Saab for advanced surveillance aircraft.

Announced during a press briefing on 9 November, the agreement – which was reached on the first day of the show – covers the provision of two Bombardier Global 6000 business jets, following their extensive modification by the Swedish company.

“I am extremely happy to announce the first deal that has been signed,” Maj Gen Abdulla Al-Hasheim of the UAE defence ministry said, flanked by Saab chief executive Håkan Buskhe. 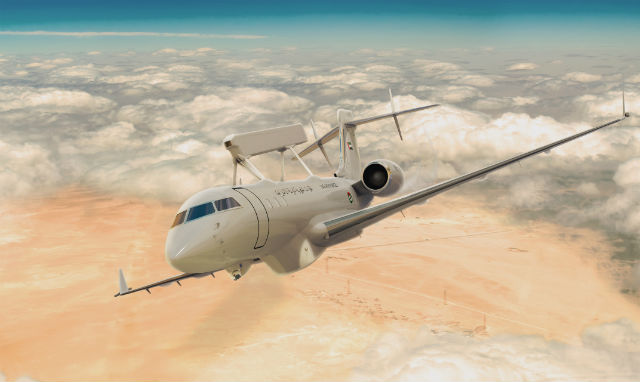 “We are very happy to continue our relationship with Saab,” says Al-Hasheim, adding that the air force’s current two airborne early warning-roled Saab 340 turboprops will also be upgraded under the arrangement.

“We have been here for a couple of years with a very skilled partner, and have also contributed to many of the new ideas of utilising airborne early warning systems,” Buskhe says. “The new version of the Erieye and the swing-role system is a game changer in surveillance capability,” he adds.

The new suite of sensors for the swing-role surveillance system has been tested, but a delivery schedule has yet to be finalised between the partners. The UAE order represents the first AEW application for the Global 6000 platform, which already is used in a special mission role for the US Air Force.

The Canadian airframer’s model was selected following “a huge evaluation of different platforms”, according to Al-Hasheim, who says it was the best choice in meeting the UAE’s operational requirements. Other types which had been promoted for potential use by the customer included a Boeing 737-based system and Northrop Grumman’s E-2D Advanced Hawkeye.

“That is the first deal that has happened here at the Dubai air show, and we will be keeping you updated,” says Al-Hasheim. “Watch out for some good ones!”