Few images encapsulated the post-apocalyptic feel of lockdowns and their effect on aviation as those ghostly, silent terminals at some of the world’s busiest airports. Yet as once ram-packed international hubs such as London Heathrow emptied of passengers and their owners fretted about their future, other, smaller air gateways, many of them not too distant, were quietly prospering. They have continued to do so even as travellers have returned in a big way to commercial aviation. 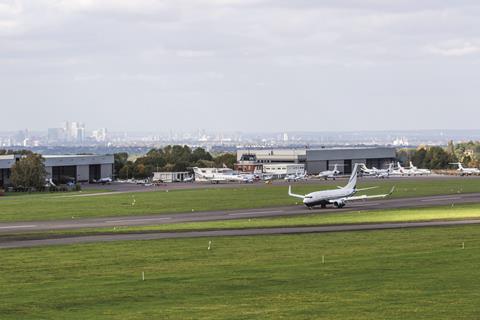 Biggin Hill says its strength is the sum of its parts

“We never shut, even at the peak of the crisis,” says Robert Walters, commercial director at London Biggin Hill Airport. “Covid magnified the benefits of business aviation airports.” Like many of its counterparts, Biggin Hill, a former wartime air base 18km from central London, has seen business aviation movements increase from roughly 3,500 in the first quarter of 2019 to 5,000 in the same period in 2022. The pandemic provided a kick-start rather than a brake.

Much of this is down to first-time users of business aviation. With international airline travel ironically becoming more stressful than ever as border restrictions relaxed, many individuals who could afford to opted for the ease of turning up at a private airfield and boarding an aircraft that they perceived to be a more Covid-secure environment than an airliner cabin. There were even friendly staff on hand to check any pandemic-related international paperwork was in order.

With commercial carriers withdrawing unprofitable international services – even when legal restrictions were lifted – and cancelling others at short notice for operational reasons, many of those who needed to travel for business reasons, or wanted to for leisure, discovered that they could not rely on their frequent flyer status with their favourite airline. The result has been a boom in demand for charter services in the past 12 to 18 months, with business aviation airports a major beneficiary.

For Biggin Hill, there is another reason it is thriving. The airport has been investing heavily in its infrastructure with the aim of attracting not just business travelers but tenants, particularly maintenance, repair and overhaul providers. Privately-owned Biggin Hill may be behind dedicated rivals such as Farnborough and Paris Le Bourget, as well as Heathrow, Luton and Geneva, in terms of business aviation traffic, but it claims to have more MRO operators than any other airport.

The anchor tenant is Bombardier, which is due to open a hangar capable of housing 14 Global 7500s later this year. It will be the biggest OEM-owned facility in Europe. The structure will replace the Canadian manufacturer’s existing Hangar 510 nearby, which it shares with fixed-base operator Signature, and was originally designed by defunct Qatari charter operator Rizon Jet. Bombardier’s decision to build its new hangar at Biggin Hill is a “huge endorsement of our strategy,” says Walters.

JETMS Completions has ambitions to raise its game in business jet interiors, says managing director Keiron McNeill. He believes the UK’s reputation for luxury automotive brands gives it a platform to establish a reputation for cutting edge completions. Although Avia has not laid out its plans for the building, its purchase of Hangar 510 – soon to be vacated by Bombardier – gives JETMS Completions premises to expand its capabilities and Avia to extend its business aviation MRO footprint in the UK.

At EBACE it was announced, however, that Dubai fixed-base operator and handler Jetex will replace Signature as the tenant of the VIP terminal section of the building.

The builders are busy elsewhere at Biggin Hill. Due to open in December, as part of a £12 million ($15 million) investment, is a 56-bedroom hotel, called The Landing. It will largely accommodate overnighting crews, engineers and other professionals visiting the airport. Situated next to Hangar 510 on the perimeter of the airport, so handy is it for arriving pilots that Biggin Hill has come up with the slogan: “Touch down to head down in 10 minutes”.

Although the airport toyed with leasing the hotel to a hospitality group, it has decided to run the establishment itself. However, global business aviation catering company Air Culinaire, which has a presence already at Biggin Hill, will manage the kitchen. This has a double benefit, says Walters, as captains and cabin crew will be able to discuss meal options for their VIP passengers directly with Air Culinaire chefs.

Other infrastructure plans include a third airport-owned hangar. Biggin Hill opened its second, a 6,000sq m building, in 2018. The airport’s main taxiway is being resurfaced, and the instrument landing system upgraded. Castle Air, which operates a popular helicopter shuttle to central London, is expanding its rotorcraft maintenance facility, and, longer term, there are plans for a new VIP terminal to replace the existing main airport building.

Walters says the airport’s combined strategy of attracting high-end passengers who want a seamless on-ground experience and easy access to London, and a growing cluster of maintenance companies by providing buildings to rent or land to build on has “proven resilient”. He adds: “It’s a diversified business with a strong property portfolio. The strength of Biggin Hill is the sum of its parts.” w

Another UK airport that has been spending big on real estate to help attract and keep high-profile tenants is Oxford.

While Oxford does not have the proximity advantage of Farnborough and Biggin Hill to the capital, on a good day clients can reach the west end of London in little over an hour by car. In addition, the airport is on the doorstep of the Cotswolds district, where many of the UK’s wealthy have homes, and “motorsport valley”, centre of the country’s motor racing industry.

Like Biggin Hill, Oxford sees helicopter shuttles as an essential part of the airport’s appeal – clients can be picked up from their country houses for international flights, or connect to London’s heliport in Battersea, also owned by Reuben Brothers. The airport recently opened seven helipads next to the taxiways.

James Dillon-Godfray, head of business development, also acknowledges the potential for electric vertical take-off and landing (eVTOL) aircraft to fulfil this role in the future, as well as providing training, maintenance, recharging and other support services for the emerging sector. “They are not going to be able to do this from downtown vertiports,” he says.

Over the years, Oxford has been transitioning from predominantly a general aviation airport – known for its flying schools – to one more focused on larger private aircraft. While training still dominates, like Biggin Hill it has seen its business aviation traffic grow substantially during the pandemic recovery period, by almost 40% in 2021.

Attracting maintenance and other business aviation service providers is also part of its strategy. Airbus Helicopters and valeting specialist Up & Away are long-term tenants, and more recent arrivals include aircraft reseller and charter company Volare.

During 2021, the airport opened a 7,000sq m hangar, which it is renting to tenants. It will complete a second in 18 months, and has permission to build a third. A new fuel farm has opened, and a science park, on land the airport owns, is taking shape near the entrance to take advantage of Oxford University’s many technology and bio-science spin-offs that need premises.