The US aerospace industry’s trade group has commenced a study into the durability of rotating turbofan components at the request of the Federal Aviation Administration.

The study follows an FAA request stemming from the 2016 uncontained failure of a GE Aviation CF6 turbofan on an American Airlines Boeing 767. Investigators traced that failure to fatigue cracking of a disk.

As the study progresses, GE says it has launched its own enhanced engine inspection programme.

More broadly, in recent years the industry, regulators and safety experts have sought to address concern about engine failures precipitated by undetected cracks in life-limited components.

Regulations require operators to replace life-limited components, which include high-stress rotating parts, when they reach a designated service life.

Fatigue cracking has been traced to several other recent engine failures, including a 2018 Southwest Airlines incident that killed one passenger. That failure involved a fan blade.

Trade group Aerospace Industries Association (AIA) confirms to FlightGlobal it has commenced a study that will examine the durability of rotating engine components.

At least one engine maker – GE Aviation – has taken a step on its own, having launched a new “Enhanced Life-Limited Part Inspection Program”.

AIA declines to say when it began the study or when its review might conclude. The group does not provide additional information.

In a 2018 letter, the FAA requested the AIA’s help in identifying means to improve inspections of new and in-service rotating engine parts, including “critical high-energy, life-limited rotating parts for all engines.”.

The conclusions, the letter says, could include recommendations and “industry-level” participation.

The FAA’s request came in response to the National Transportation Safety Board’s (NTSB) report into the 2016 American 767 incident. One of that aircraft’s CF6-80 turbofans suffered failure of a “high-pressure compressor stage two disk” due to “low-cycle fatigue cracks”, the NTSB found. 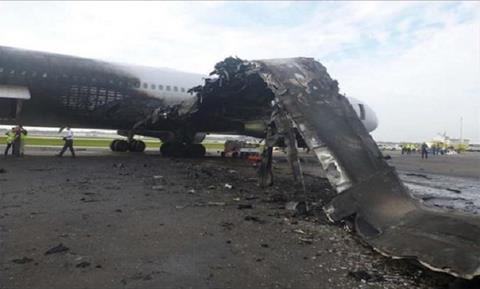 The failure occurred on the ground at Chicago during the aircraft’s take-off roll, led to a fire and substantially damaged the aircraft. During evacuation, 21 people were injured, one seriously, according to the NTSB’s report.

The FAA did not immediately provide more information about the study it requested from AIA.

“We believe the recommendations from [the AIA] study will be adopted industry-wide,” GE says. “As an industry leader, GE has elected to develop these enhanced inspections ahead of any potential directives.”

“The initial focus has been high-pressure turbine disks and compressor spools,” GE says.

The enhanced inspections will take place during engine overhauls and include “eddy-current or borescope-fluorescent penetrant inspections of spool cavities”. They will also include “immersion ultrasonic” inspections of high-pressure turbine disks, fan disks and forward outer seals, GE says.

“Technologies have changed over the years and our understanding of our parts has improved,” says the engine maker. “This enables us to develop enhanced inspections which will improve the long-term reliability of our products.”

Several other turbofans have suffered failures due to fatigue cracks in recent years.

Those include two inflight CFM56 failures on Southwest Boeing 737-700s – one each in 2016 and 2018.  Fan blade failures due to fatigue cracks caused the incidents, the NTSB found.

The 2018 failure killed one passenger who was partially sucked out a window that had been broken by fan cowl debris following the fan blade failure, the NTSB has said. 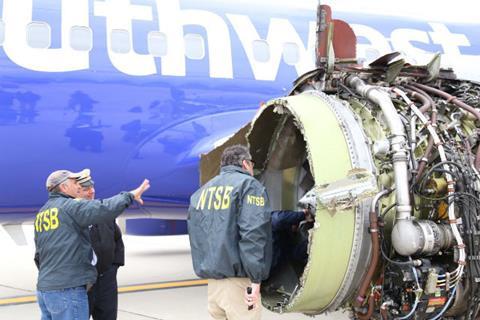 The mangled CFM56 engine of a Southwest Airlines’ Boeing 737-700 that suffered an uncontained failure in flight in 2018.

Additionally, a United Airlines 777’s Pratt & Whitney PW4077 turbofan failed over the Pacific Ocean in 2018 due to a blade crack caused by low-cycle fatigue.

The FAA has taken other steps to address such failures.

A proposed order made public on 12 August would require operators remove some high-pressure turbine rotor stage two disks and compressor discharge seals in GE90s. The move follows reports of anomalies not detected during manufacturing that could cause uncontained failures, the proposal says.

GE tells FlightGlobal it is confirming that “material properties of these parts meet our stringent specifications”.

“There have been no findings in finished parts, and the proposed removal threshold will not require any immediate action,” it adds.

Also, in June the FAA proposed requiring ultrasonic inspections of GEnx high-pressure turbine rotor stage two disks. The issue, which GE also addressed with additional inspections, came to light after a “subsurface anomaly was found in an early-production” disk, says the proposed rule.