Technologies that could equip a future generation of Pratt & Whitney geared turbofan (GTF) engines, including hybrid-electric and steam-injection systems to slash greenhouse gas emissions, are to be matured under an ambitious EU-backed research programme led by MTU Aero Engines.

In September, the EU’s Clean Aviation body disclosed that it had selected MTU’s Switch effort – sustainable water-injecting turbofan comprising hybrid-electrics – as one of 20 projects sharing €700 million in phase-one funding. Also included in the MTU-headed consortium are Airbus, Collins Aerospace, GKN Aerospace and P&W, alongside several research bodies and universities. 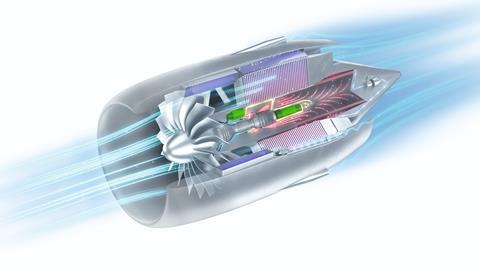 MTU has previously disclosed research and technology activities around its water-enhanced turbofan (WET) engine concept, which recycles water and heat from the exhaust stream to inject steam into the combustion chamber. This is predicted to increase overall engine efficiency through heat recovery, and cut greenhouse gas emissions and contrail formation.

However, the Switch project sees the WET architecture combined with a parallel hybrid-electric system, including a pair of motor generators - a 500kW unit on the high-pressure spool and a 1MW unit on the low-pressure spool – to further optimise the performance of the gas turbine.

“We aim to demonstrate the potential of these technologies to improve fuel efficiency and hence reduce CO2 emissions by up to 25% compared to the state-of-the-art propulsion systems for short- and medium-range aircraft,” says Dr Claus Riegler, senior vice-president technology and engineering, advanced programmes at MTU. NOx emissions could be reduced by 80% and contrail formation by half.

Riegler declines to reveal the overall project cost but says it is a 50-50 split between industry and public funding, including a contribution from the UK Research & Innovation agency.

Under the project’s timeline, by 2025, ground runs of a hybrid-electric-equipped GTF will have been performed, alongside technology and component tests for the WET engine, plus aircraft integration studies for the combined system.

But Graham Webb, chief sustainability officer at P&W, says the project partners are already looking to go further. He sees the potential to conduct flight demonstrations of the hybrid-electric GTF “as early as 2026”, providing the underlying technologies are proven and additional funding is secured.

Phase one activities should take the WET concept to technology readiness level (TRL) 4 by the end of 2025, with the hybrid-electric system at TRL5. A second stage could then follow, running from 2026-2030, says Riegler, taking the Switch engine to TRL6 and encompassing “an integrated ground and hopefully flight test for the overall Switch concept”.

Webb sees Switch as an opportunity to “build technologies that will further extend the efficiency of the GTF architecture”.

“With Switch, the revolutionary WET and hybrid-electric technologies will be integrated to deliver a step-change in emissions and also improve efficiency or reduce energy across the full operating system of the aircraft,” he says.

Within the consortium, P&W will be responsible for the overall integration of the hybrid-electric and WET systems into the GTF engine, plus the steam combustion technology. 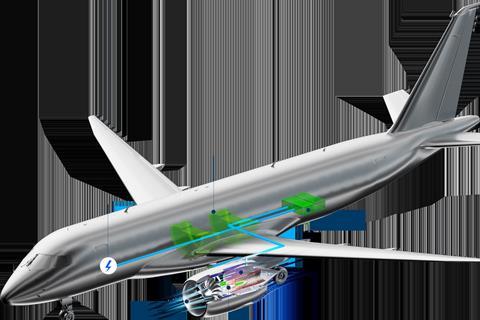 P&W is already working on a related project, funded by the US Department of Energy, called HySIITE, which uses steam-injection technology in a hydrogen-burning engine.

Webb acknowledges some similarities between the two concepts with “several component technologies” common to both. However, while the Switch powerplant will be evaluated for hydrogen compatibility, its “primary fuel” is designed to be sustainable aviation fuel (SAF), rather than liquid hydrogen in the HySIITE engine.

“They are related, but there are some significant differences in terms of the heat-exchanger medium, when we are talking about air versus cryongenic hydrogen from the condenser perspective, as well as the other heat exchangers.”

Collins, which will be the “nacelle architect”, will supply the condenser for the WET engine, and handle its integration into the structure as well as seeking to “maximise thrust reverser functionality”, says Mary Lombardo, vice-president of applied research and technology at the US aerospace giant.

Additionally, Collins will supply the motor generators, safety elements of the power distribution system, and will demonstrate the “Switch integrated electric [power]train” at a new facility in Rockford, Illinois, scheduled to open next year.

Those motor generators “will enable the engine to operate more efficiently across the full flight envelope”, says Webb, providing additional power during key flight phases such as take-off or climb, or even relieving the gas turbine as required. Using energy harvesting, the aircraft’s batteries will be recharged during the cruise.

Karim Mokaddem, Airbus head of electrification, says the airframer’s role will be to “assess that this approach is beneficial at the aircraft level”.

“The whole system optimisation, which is key, is around managing the energy at the aircraft level in such a way that the benefits [of the Switch architecture] are not killed by the added weight that we are providing with the new technologies,” he says.

Riegler says the additional equipment required for the WET system – the condenser, steam generator and water separator, for example – will see the “propulsion system grow in weight by about 50%”. The extra components will also mean a longer engine, creating more drag.

“I would like to point out though that the weight [and drag] increase is significantly compensated by the SFC [specific fuel consumption] benefit we will get,” says Riegler.

“So, in the end, on a system level, on a fuel-burn level, that engine, or that concept, provides significantly to the overall 25% fuel-efficiency benefits.” 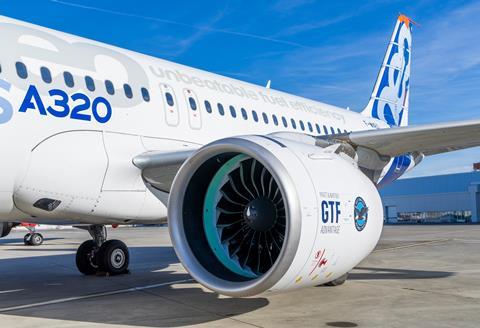 Additionally, the hybrid-electric system will add another 1t of mass, estimates Mokaddem. “But this is why we need to make it beneficial with this drawback,” he says. “And into that the key technology that will pave the way to more benefits is the battery.”

He sees improvements in battery energy density arriving over the coming years, largely driven by the automotive sector.

Although both the hybrid-electric and WET systems offer potential performance improvements on their own, Riegler argues that there will be greater synergies from combining them, in particular to address the impact of the large heat exchangers on the “transient operation” of the engine: “We think that with a combination with hybrid-electric there is a significant opportunity to counteract that drawback,” he says.

P&W has for some years been considering what technologies to adopt on a second-generation GTF. Webb says both the hybrid-electric system and the WET technology will be considered, but much will depend on their maturity when airframer demand emerges.

“At the point in time that there is an opportunity for a new application and a new GTF engine, we are going to take everything we can get and leverage that for maximising the benefit to our customers.

“Right now, it’s not possible for us to say whether it’s [generation] two or three, it’s really dependent on how these technologies mature and develop over the course of this project.”

However, integration with the airframe will be key, he stresses, due to the dynamics of such a novel propulsion system. To date, neither of the big two airframers has indicated any need for a new powerplant before the middle of next decade.

While Airbus will consider the applicability of the Switch engine for its existing products – including a possible platform for demonstration flights – Mokaddem sees the changes to the aircraft architecture driving the need for a clean-sheet design.

Besides leading the project, MTU is also responsible for the steam turbine and water-recovery unit of the WET system. GKN Aerospace, meanwhile, will develop various engine structure, including integrated electric machines, the vaporiser and heat exchangers – utilising its hot test rig in Trollhattan, Sweden – while GKN Fokker in the Netherlands will develop the high-voltage power-distribution and wiring systems.