Vietnamese carriers VietJet Air and Bamboo Airways have both signed agreements with Safran, during a visit by the country’s prime minister to France.

Bamboo and Safran entered a memorandum of understanding worth a potential €2 billion ($2.3 billion) related to engines for 50 Airbus A321neos and thirty Boeing 787-9s that the carrier has on order. 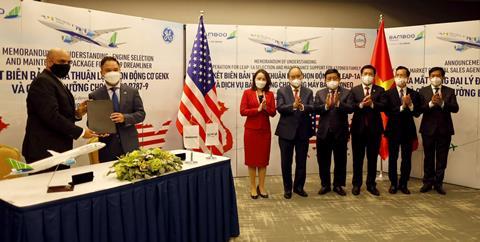 The carrier’s 12 in-service A320neo family jets are powered by CFM International’s LEAP-1A engines – CFM is a joint venture between Safran and GE Aviation.

Bamboo will also look at Safran interiors for its cabins.

Separately, Safran and VietJet signed what they call a “comprehensive strategic partnership” that builds on their existing relationship involving CFM engines, which they value at $10 billion.

“Building on both sides’ existing cooperation in aircraft engine and engine services through CFM International worth approximately US$10 billion, Vietjet and Safran will extend their cooperation to a long-term strategic partnership to cover more aircraft engine deals and a variety of other aspects such as aircraft seats and interiors supply,” say the pair.

The agreements follow another VietJet agreement signed with Rolls-Royce on 31 October, involving a $400 million deal for Trent 700 engines, for the airline’s “coming widebody fleet.”

The Trent 700 is the powerplant for the Airbus A330, a type that VietJet does not operate nor have on order. When contacted, VietJet was unable to provide clarity about its widebody plans.