The Canadian engine maker, a division of Connecticut-based Pratt & Whitney, confirms the news on 14 September.

“The PW812GA showed exceptional performance during testing with more than 3,400h of engine testing, including 260h of flight testing,” P&WC says. 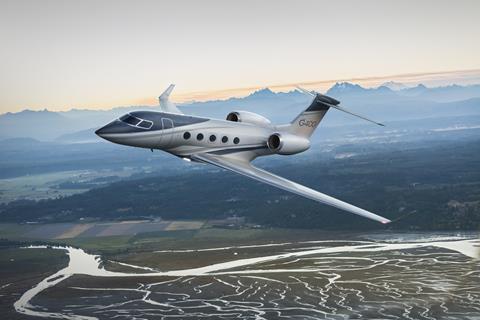 A rendering of the G400, which Gulfstream aims to have in service in 2025

Regulator Transport Canada did not immediately confirm the type certificate with FlightGlobal.

Gulfstream’s G400 will have twin PW812GAs, each cranking out 13,496lb (60kN) of thrust, according to the Savannah aircraft manufacturer.

PW812Gs are a variant of P&WC’s baseline PW800 powerplant. Other variants power Gulfstream’s G500 and G600 business jets, which are in the same aircraft family as the G400. The PW800 series also shares technology with P&W’s PW1000G geared turbofan, which powers commercial jets including Airbus A320neos.

“We worked closely with Transport Canada to create an efficient and thorough certification process that successfully led us to this point,” P&WC president Maria Della Posta says. “We are gratified by the steady progress the PW800 engine family has achieved based on its ability to deliver a new level of performance and efficiency.”