Each of the UK Royal Air Force’s Eurofighters currently spends around 42 weeks on BAE Systems’ Typhoon final assembly line at Warton: a performance which the company expects to improve to 34 weeks as Tranche 2 deliveries ramp up from next year.

A key part of the company’s ability to meet this challenge will be provided through the lean principles that it has been introducing at its Warton and Samlesbury plants in Lancashire over the last several years in support of the Typhoon and other aerospace projects.

Partly developed by drawing on the lessons learned at Airbus UK’s Broughton wing assembly site in north Wales, BAE’s lean initiative is intended to reduce the cost of its structural component production for the Typhoon at Samlesbury by 5% per year – an initiative which will contribute to cutting the aircraft’s cost ahead of a vital Tranche 3 production order to be negotiated from early 2009. It is also intended to ensure that the company maintains its competitiveness to retain current work on the Lockheed Martin F-35 Joint Strike Fighter and Airbus commercial aircraft. 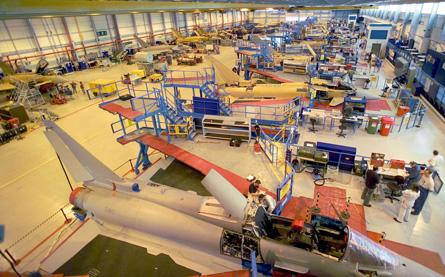 Typhoon structures including composite engine bay doors and titanium fuselage frames and canards are produced at Samlesbury, with advances in engineering techniques having enabled BAE to produce larger single structures, reducing the total number of components used compared to previous products such as the Panavia Tornado. This trend is advancing further still for the next generation of combat aircraft, says Jon Evans, BAE’s operations manager, machining and treatments. “JSF components are light and thin,” he says. “We’ve pushed the boundary on again from Typhoon.”

BAE says its current fabrication work on the Typhoon is far from “metal-bashing”, citing the aircraft’s 98kg (216lb) canard as an example of its advanced manufacturing skills. The structure is made by diffusion bonding six sheets of titanium together at 950°C (1,740°F), with print patterns etched on each sheet later expanded by passing argon gas through the structure at 150°C in a super-plastic forming process. Requiring a total of 450 individual steps before completion, each canard is expected to last for the life of the aircraft, with one test example now in its second year of destructive test and having outlived its first test machine. “That’s at the strategic end of the market,” says hot form product manager Andy Shorthouse.

Around 400 employees work at Samlesbury in the machining and treatment of hard and soft metal components for the Airbus A320/A321 family, Typhoon and JSF. While the latter aircraft currently accounts for just 10% of such activities, a new building will be opened at the site to meet increasing demand as the US programme advances towards series production. BAE last month shipped the aft fuselage for Lockheed’s first short take-off and landing F-35 from the Samlesbury.

BAE Typhoon managing director Chris Boardman says that while politics has played a part in international companies securing participation in the JSF project, “our something else was the technology that we’d developed on the Eurofighter. It’s the key thing that underpinned our workshare activity.”