Lockheed Martin F-35s have fired their first non-US-produced missiles in testing, with the activity providing a boost to MBDA’s sales efforts for the ASRAAM. 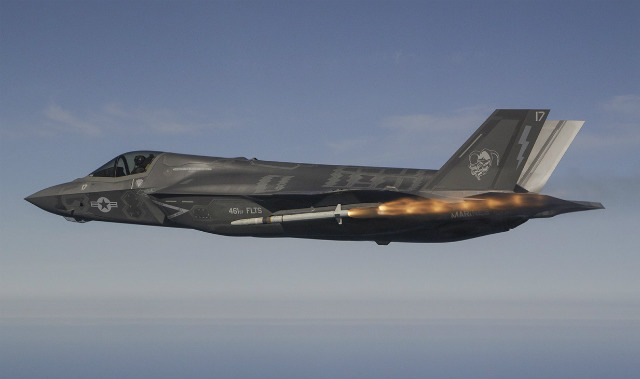 The short-range, infrared-guided ASRAAM is being integrated with the short take-off and vertical landing F-35B variant for the UK. “The effort is progressing to plan, and these integration activities will allow the initial operating capability of the aircraft” for the nation, MBDA says.

The European company hopes that other F-35 customers could opt to acquire its weapon, in preference to the Raytheon AIM-9X. Australia already uses the Mach 3-capable missile on its Boeing F/A-18A/B strike aircraft, and has previously expressed some interest in also using it with its Joint Strike Fighters.

“The fact that it is a real firing that has taken place is important, because that allows the other F-35A and B users to now have a choice,” says Dave Armstrong, MBDA’s executive group director for sales and business development.

Meanwhile, Armstrong says the company remains hopeful that the US military could acquire its Brimstone air-to-surface missile to provide some of its fast jet platforms with an “off-the-shelf” precision strike capability against moving targets, despite the business uncertainty raised by US President Donald Trump’s buy-American agenda.

“We know that the US military still aspires to have Brimstone on [Boeing] F-15 and F-18,” he says. “It’s a question of economics and programme management.”

MBDA on 15 March reported its receipt of new orders worth €4.7 billion ($5 billion) in 2016, against sales totalling €3 billion. This compares with respective figures of €5.2 billion and €2.9 billion in 2015, and chief executive Antoine Bouvier notes that the company’s book-to-bill ratio over the past four years has been 1.6, due to “an exceptional order track record”.

Domestic business in the company's European home nations accounted for €3.2 billion of the orders received last year, says chief financial officer Peter Bols, with business from the UK and France worth €1.6 billion and €1.3 billion, respectively. Exports totalled €1.5 billion, including an initial batch of weapons ordered for the Indian air force’s future fleet of 36 Dassault Rafales.