While all airframers are struggling to navigate a smaller post-coronavirus industry, Brazilian company Embraer sees itself well-positioned as airlines look to rebuild networks and find ways to survive, and thrive, in the new normal.

The San Jose dos Campos-headquartered company, the world’s clear number three aircraft manufacturer behind Boeing and Airbus, hopes its new line of re-engineered regional jets, the E2 series, will benefit from the downturn in ways it could only imagine six months ago. Meantime, its older E1 jets - both new and used - continue to be bestsellers.

With airlines retiring older, larger, less-efficient aircraft, and consumers slow to return to air travel, airlines will be looking to maximise income while keeping costs low for an extended period. This, the company believes, is why E-Jets will excel.

That said, the coronavirus and the 11th-hour collapse of what would have been a game-changing merger with Boeing Commercial Airplanes have given Embraer Commercial Aviation’s new chief executive a lot to chew on during his first month on the job. 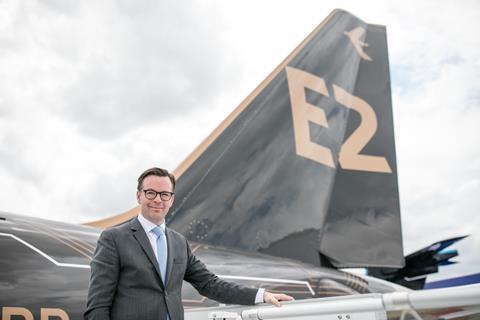 “While our industry has survived many huge shocks, and often emerged stronger, the impact of Covid-19 has been deeper, broader, and more damaging,” Arjan Meijer, Embraer commercial CEO and president, tells FlightGlobal on 17 July. Meijer, the airframer’s former chief commercial officer, took over the top commercial post from John Slattery last month.

He says the company’s E-Jets will be key in helping customers rebuild after the devastating effects of the global health crisis.

Early indications show that domestic, short-haul leisure travel is likely to rebound faster than long-haul international journeys. Vacationers, tired of sheltering-in-place, looking for a quick getaways, may be quicker to book trips than businesspeople, who remain subject to employers’ travel restrictions and shrinking budgets. If anything, the past five months have shown that videoconferencing, though far from perfect, can be an effective alternative to in-person meetings.

Embraer holds a 60% share of the global regional jet market, with both its E1 and E2 lines doing brisk business all over the world, Meijer says. The company recently delivered its 1,600th E-Jet to Switzerland’s Helvetic Airlines, an E190-E2. Last week, Helvetic upgraded its remaining four E190-E2 orders to the larger E195-E2. 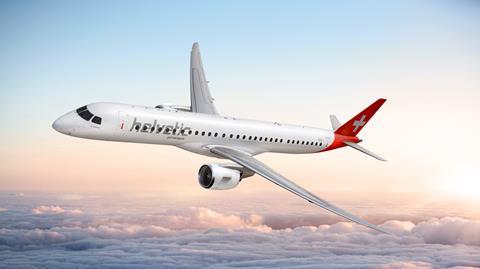 “Carriers are gradually restoring their networks, with some reporting they will fly up to 80% of their routes by July,” with E-Jets instrumental in incrementally adding capacity as demand recovers, Meijer says.

In Europe especially, smaller aircraft are playing a major role in the regional recovery.  “It is no surprise that airlines are focusing on domestic and regional networks where restrictions are fewer and demand is more resilient.”

Meijer arrived in his new role at a pivotal time for Embraer. With the coronavirus pandemic decimating the industry in the past six months, and a potential marriage with Boeing called off earlier this year, he sees an opportunity for Embraer to lead the 70-150-seat segment.

E-Jet competitors include Airbus’ A220 and Mitsubishi Aircraft’s stalled SpaceJet programme. In May, the Japanese company halted flight testing of its 90-seat SpaceJet M90 regional jet and suspended development of its 76-seat M100.

“The slower pace of development at Mitsubishi aircraft is probably only temporary,” Meijer says. “It’s challenging for a new aircraft company to market its first product in any situation. Attempting it in the midst of a global recession is not something I would envy.”

But the virus has left its mark on the Brazilian company.

While Meijer confirms no customers have yet cancelled aircraft orders, there have been deferments by airlines looking to conserve cash until their businesses return to a more-normal state.

E175-E2s, which can seat 80-90 passengers depending on configuration, may be an attractive proposition for some airlines. But Embraer is largely hindered from selling the type in North America – the biggest regional jet market in the world – because the jet exceeds “scope clause” limits in pilot contracts.

Scope clauses are provisions in contracts between major US airlines and pilot unions that keep airlines from farming out more flying to regional airlines. They largely prohibit regional affiliates from operating aircraft that have more than 76 seats or maximum gross take-off weights exceeding 86,000lb (39,000kg). While the first-generation E170 and E175 did not exceed that limit, E175-E2s, with heavier Pratt & Whitney PW1700G turbofan engines, put E175-E2s about 12,000lb over that maximum weight.

“Of course, the North American market is important, but there is significant potential for the E175-E2 outside the US,” Meijer says.

So far, Embraer has delivered 22 of the first two E2 variants to airlines in Europe, South America and the Asia-Pacific region.

JILTED AT THE ALTAR

Embraer is also still dealing with aftereffects of being jilted at the altar a day before it was to join forces with Boeing Commercial Airplanes. Boeing was to pay $4.2 billion for an 80% share of Embraer’s commercial division, and the Brazilian company had invested more than $120 million to carve out that business before the agreement collapsed in late April.

Boeing called off the proposed merger at the last moment, saying Embraer “did not satisfy the necessary conditions”. Embraer has a different perspective, responding at the time that Boeing sabotaged the deal to “avoid its commitments” and that it would pursue damages.

Embraer had said Boeing engaged in “a systematic pattern of delay and repeated violations of the [agreement] because of its unwillingness to complete the transaction”.

Analysts have said the purchase may have been too costly for Boeing, which was concurrently dealing with the coronavirus downturn and the grounding of its beleaguered 737 Max.

That said, four months later, Meijer is now downplaying the ill effects of the deal’s demise.

“The improper termination of the agreement by Boeing was disappointing. The agreement would have been a positive move for both companies, but not fundamental,” he says, adding that Embraer is looking to pursue partnerships on specific projects, such as those involving project development or engineering services.

“Across the broader company, we are also considering opportunities in high-tech segments related to our business, such as cybersecurity, air traffic control and satellites, in addition to expanding the provision of services to other manufacturers,” he says.