Embraer has notched orders for a total of 28 aircraft and 13 options from two North American carriers.

Seattle-based Alaska Air Group has placed an order for eight E175 aircraft as well as the 13 additional options, the companies said at the Farnborough air show on 19 July. The aircraft will fly exclusively for Alaska Airlines under a capacity purchase agreement with regional subsidiary Horizon Air.

“The E175 is the backbone of the US regional network, feeding airport hubs across the country as well as producing the connectivity all communities need to thrive, both economically and socially,” says Embraer commercial aviation vice-pesident Americas Mark Neely.

”The Embraer E175, with 85% market share in its segment, is keeping the US on the move and in touch.” 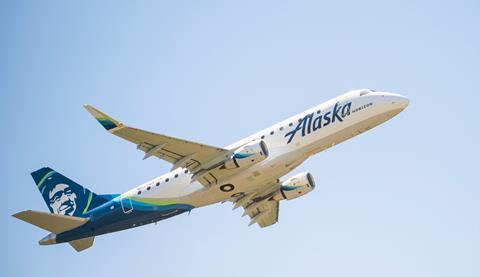 Horizon Air currently operates 30 of the type, according to Cirium fleets data, and previously had 20 further jets on order and another 20 on option.

“The E175 is an extremely efficient aircraft,” says Alaska Airlines senior vice-president of fleet, finance and alliances, Nat Pieper. “The jet is the perfect aircraft to serve Horizon’s regional network in the Pacific Northwest and beyond.”

Michael Deluce, president and chief executive of Porter Airlines says: “Embraer has a proven aircraft, representing the best of environmental efficiency, operating performance and passenger comfort. We are in final preparations to introduce the E195-E2 to North America.”

Porter’s fleet currently consists of 29 De Havilland Canada Dash 8-400 turboprops, all of which are in service, according to Cirium fleets data.