Azerbaijan Airlines has signed a preliminary deal with Boeing to acquire a further four 787-8s.

The airline already operates a pair of 787-8s and has announced the follow-on commitment during the Farnborough air show today. Boeing notes that it forms part of the airline’s intention to grow its Dreamliner fleet to 10 by 2030. The airline outlined a commitment for four more 787s in 2017. 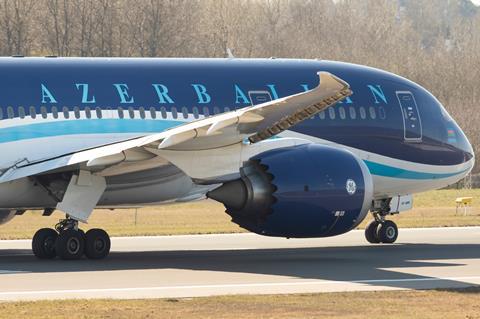 Azerbaijan Airlnes president Jahangir Asgarov says: ”This MoU is the evidence of joint efforts to scale up the mutually beneficial partnership between Azerbaijan Airlines and Boeing.

”Over the years, our 787 airplanes have provided impeccable performance, and the addition of more long-haul airplanes will further expand the geography of Azerbaijan Airlines’ route network.”

Azerbaijan’s commitment marks the second Dreamliner deal announced during the show, after AerCap signed for five of the type yesterday. These are the only widebody deals announced so far during Farnborough.