The Eurofighter (chalet A34- 35, OE12) programme received a major boost at the Farnborough air show on 9 July, with the confirmation that its four partner nations have reached an agreement to introduce a further batch of enhancements for the type.

These will see the Typhoon gain an active electronically scanned array radar, an advanced suite of defensive aids subsystem equipment and MBDA's Meteor beyond visual-range air-to-air missile. Also to be included is the "further development of the air-to-air and air-to-ground capabilities and integration of new weapons" to boost its multirole capabilities, with the latter to include Raytheon Systems' Paveway IV precision-guided bomb.

Eurofighter had scheduled a media briefing with chief executive Enzo Casolini for Tuesday, but news of the development with Germany, Italy, Spain and the UK was released by Prime Minister David Cameron's press office after he visited the company's pavilion on the opening day of the show.

"The further development of Typhoon that we have been working on with our partners is good for the Royal Air Force, who need this capability, good for our export customers, who want it too, and brilliant for the British manufacturers and British workers who are going to benefit," Cameron says.

Approval to integrate the new equipment represents the go-ahead for a Phase 1 Enhancement programme for later Tranche 2 production examples of the Typhoon, dubbed P1EA. Export customer Saudi Arabia is also looking to introduce similar enhancements for its eventually 72-strong fleet of the type, along with the Thales Damocles targeting pod. 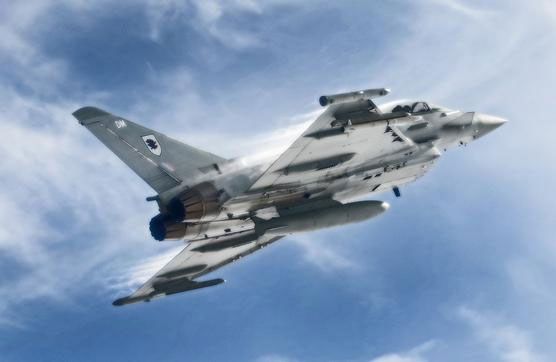